Belkin today announced that it is officially adding HomeKit support to its popular Wemo lineup of smart connected accessories with the launch of the new Wemo Bridge.

Customers who own Wemo home automation products have been eagerly awaiting the debut of the Wemo Bridge, which Belkin first unveiled earlier this year. It was meant to launch in the fall of 2017, a target that was missed, but it will be available for purchase starting tomorrow. 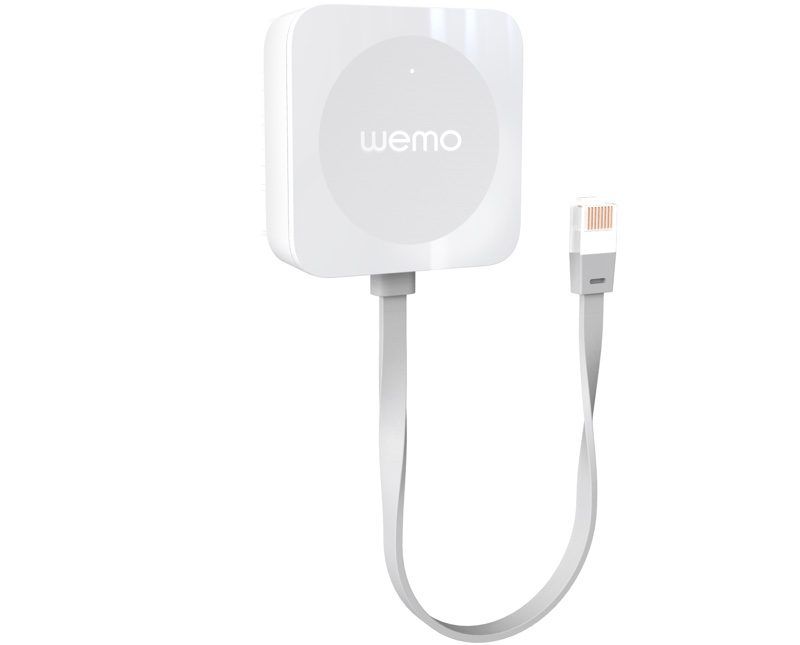 Details about the bridge have already been added into the Wemo app, so some customers may have already noticed its imminent availability.

The Wemo Bridge is designed to connect to any home Wi-Fi router via an Ethernet cable to add HomeKit connectivity to current Wemo Smart Plugs and Light Switches. With the addition of the bridge, selected Wemo accessories can be controlled via the dedicated Home app or through Siri, and they can interact with other HomeKit products using Scenes, Schedules, and Timers.

"We've had an overwhelming positive response from customers when we announced last spring that we would make the Wemo Bridge compatible with HomeKit support, said Kara Alexander, Wemo senior product manager. "We have made it a top priority working with Apple to ensure an incredible experience for both Wemo and HomeKit users. Bringing together two of the most influential Smart Home platforms will enable millions of current and future Wemo users to experience the benefits of HomeKit, including the Apple Home app, Siri integration and interoperability with other HomeKit devices."

The HomeKit-connected Wemo Bridge will be available for purchase starting on Monday, January 8 from Belkin, Amazon, Apple, and Best Buy for $39.99.

Wait, you're using using a WeMo Maker and some wires to control your garage door, but you consider Homebridge to be Heath-Robinson?...

...I guess if you just have a few buttons, Homebridge might not make sense. For me, it's been the bridge for the last three years for about 20 Insteon devices and a bunch of zwave devices.


I ONLY would need it for the Wemo Maker so yes, it wouldn’t make sense. Plus, I want something that doesn’t need to be maintained by me every time there is a iOS update or Apple changes something at their end, rendering Homebridge inoperable (temporarily or permanently) as it’s technically not kosher. I’m not interested in ‘fiddling’ with this stuff.

I’ve slowly replaced all my Wemo devices with Elgato Eve devices (which are way better IMHO)... except for the Wemo Maker. But I suspect I’ll find a way to replace that too soon enough.
Rating: 1 Votes

ayale99
I'd like to be a Homekit purist, but the Google Home Mini I got for Xmas works with Wemo and almost every other smart home device I have (without the need for a bridge). It fills in the gaps where Homekit compatibility is missing... for now.

jokerz126
Just ordered it directly from their site with code for around $26. Better than $40.. says free 2 day shipping.
Rating: 1 Votes

Scooz
Were this bridge and the attached costs actually necessary or is this just about Belkin’s profit model and Homekit compatibility could have been implemented by providing a software upgrade?

MacknTosh
The problem with bridges is that I only have so many ports on my router - and my sideboard already looks like Blackpool illuminations. Not to mention the need for more and more sockets to plug things into.
Rating: 1 Votes

Were this bridge and the attached costs actually necessary or is this just about Belkin’s profit model and Homekit compatibility could have been implemented by providing a software upgrade?

Asking, cause I don‘t know Apple‘s current policy nor the Wemos‘ HW capabilities (eg for encryption).

The Wemo devices themselves have no capability to interface with HomeKit. A bridge is required. Fortunately Apple seems to be easing up on the previous restrictions with regards to bridges.
Rating: 1 Votes

Actually, not in my country, nor for the type of door I have... but thanks for the 'help'.

Also, HomeBridge is not something I've ever been interested in as it's a bit Heath-Robinson, has security implications and requires a dedicated computer that's on all the time - just for a few buttons. What a waste of power. Pass.


Ok, you moan about homebridge whilst i successfully automate my entire house (and car) with Siri for the last three years - it runs on a Mac mini I have as a server at home anyone (because anyone who's seriously into technology already runs an always on low power server for multiple tasks) but even if you don't. put it on a Raspberry Pi, it'll cost about 1 pence a year.

Z-Wave devices are available all over Europe, i'll bet my right arm there is something on Vesternet that would work with your door controller.
Rating: 1 Votes

AmazingRobie
I just returned 2x WEMO outlets to B&H because this thing hadnt come out. I stand behind the decision as i wont be adding anymore dongles to my setup. No thanks Belkin. Love your micro USB cigarette outlet adapters...
Rating: 1 Votes
[ Read All Comments ]