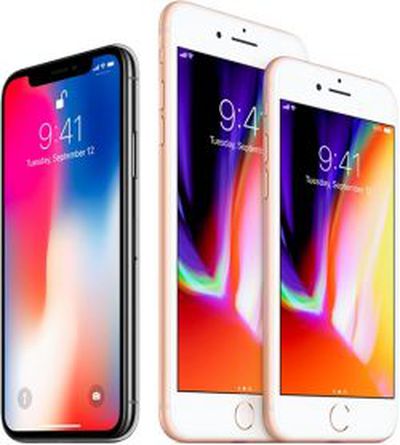 The iPhone has been named the "best-selling tech product of 2017" by analyst Daniel Ives of GBH Insights (via USA Today).

Apple's smartphone achieved the same ranking in 2016, and Ives said that the company will sell a total of 223 million iPhones in 2017, increasing from 211 million sold in 2016.

The rankings include all models of iPhone grouped together, explaining why the gap is so large between Apple's iPhone and Samsung's Galaxy S8 and Note 8.

But all in all, Apple sold more iPhones total, although less than the peak year of 2015, when it moved 230 million units. (That was the year of the iPhone 6, a redesign that brought a bigger iPhone to consumers for the first time and enthralled the public.)

Ives thinks Apple will have an even bigger 2018, with a spring update to its compact SE iPhone and more new phones in the fall. Out of the billion-plus consumer base of the iPhone, "350 million of them will upgrade next year," says Ives.

In the fourth spot, Ives described Apple Watch as a product that's now "found its niche" in the wearables market, thanks to the LTE Series 3 update that makes it less reliant on the iPhone. The analyst also cited ongoing discounts for older models, improved battery life on the Series 3, and Apple's pivot away from marketing the Apple Watch as a fashion accessory to one mainly used for fitness and working out.

OldSchoolMacGuy
But according to MacRumors members, no one bought the 8 because they all were waiting for the X and then no one bought the X because it was too expensive. I thought the iPhone was a failure.
Score: 35 Votes (Like | Disagree)

If you grouping all the iPhone family, why don't you group all the Samsung Galaxy family too?
Score: 30 Votes (Like | Disagree)

sw1tcher
My prediction for best selling tech product of 2018 is the $29 iPhone battery. :D
Score: 23 Votes (Like | Disagree)

Both product names—iPhone X and iPhone 8—are blatant lies to customers. There was no iPhone 9 and the iPhone 8 is really an iPhone 7s.

You say all this nonsense like it's fact. The iPhone X has good hardware.

You may not like the design, but a lot of people do. FaceID has some interesting and cool tech that works.

Ever use an iPhone X? The home button now feels like 1996.

DVNIEL
Yep. Another year in this toxic relationship of ours. Trapped in this lovely garden of iMessage and W1 chips.
Score: 16 Votes (Like | Disagree)

fel10
Good to see Nintendo doing so well again after the disaster the WiiU was and everyone saying how they should go third party and how doomed they are.
Score: 9 Votes (Like | Disagree)
Read All Comments