Apple's iPhone and iPad were again the most popular mobile devices gifted around the world during the holidays this year according to new data shared today by mobile analytics firm Flurry.

In the week leading up to Christmas and the end of Hanukkah (12/19 to 12/25), Flurry took a look at all new smartphone and tablet activations to see which devices consumers were purchasing most. 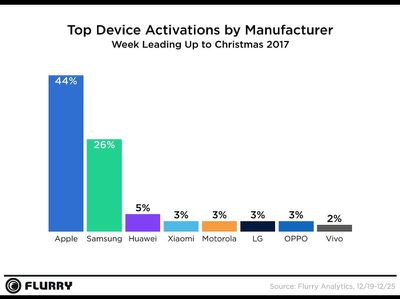 Similar to last year, 44% of new phone and tablet activations were Apple devices. While Samsung dominates global market share, they fell short as the gift of choice during the holiday season, with only 26% of activated devices in the lead up to Christmas. Samsung's activation rate is up 5% from the 2016 holiday season, which can likely be attributed to the 2017 introduction of the Galaxy S8 after the late 2016 recall of their malfunctioning Note devices.

It's important to note that Flurry examined worldwide activations, where older, more affordable devices are popular. Apple no longer sells the iPhone 6, for example, but it's still readily available internationally from third-party resellers who offer it at a discounted price.

When looking at device size, "phablets" or devices that measure in at 5 to 6.9 inches, made up 53 percent of all new device activations, while smaller phones (3.5 to 4.9 inches) made up 35 percent of activations. Full-sized tablets like the iPad (with only cellular models counted here) were responsible for 8 percent of activations. Interest in larger devices has grown significantly over the course of the last two years.

To gather its data, Flurry measured smart device activations and app downloads from the more than one million mobile apps that use the Flurry Analytics service. Flurry says it has insight into more than 2.1 billion devices around the world.

Uh Chris... this isn't an OS analysis. That would be iOS v Android. This is an OEM analysis... Apple, Samsung, Huawei, etc. Also this analysis is reporting from Flurry, not Apple. Basically, you're reading it wrong.:)
Score: 39 Votes (Like | Disagree)

This isn't iOS vs Android, this is Manufacturer A (Apple) vs Manufacturer B (Samsung, LG, Huawei etc.)
Score: 25 Votes (Like | Disagree)

1) Android is an operating system, running on thousands of different devices. iOS devices will always come with Apple hardware. There’s a big difference.

2) Had you read the article, you’d realise this was an independent review which has absolutely nothing to do with Apple’s marketing.
Score: 25 Votes (Like | Disagree)

These numbers were compiled by Yahoo, not Apple.

These numbers were compiled by Yahoo, not Apple.

It's the only way Apple can present data that doesn't make them look like a total nothingburger these days.

These numbers were compiled by Yahoo, not Apple.
Score: 16 Votes (Like | Disagree)

Yep, this is typical Apple marketing spew (yeah I know it's a third party, but you can easily look at the way the data is presented and see who the bias is toward). If you look at actual sales, Android OS devices outsell Apple something like 19 to 1. It's not even a competition anymore like it was 5 years ago. LOL. The world has spoken and Android is the Windows and iOS is the Mac. It'll always be that way. Apple isn't going anywhere but Android is always going to be the dominant force by far.
[doublepost=1514390935][/doublepost]

Did I say anything to the contrary? It's the only way Apple can present data that doesn't make them look like a total nothingburger these days. Why do you think whenever Apple talks about Mac marketshare they compare to makers not OS... when in reality people buying PCs are buying windows computers, not for the brand of hardward. Mac vs PC Windows and iOS vs Android are the only comparisons that matter anymore. To compare based on anything else is just silly and trying to twist the numbers to support a position that's just not there.

The way you choose to assume that Apple had anything to do with the way these numbers are presented tells me that you’re biased towards Android. I don’t have any evidence to back that assertion, but apparently we don’t need any evidence- we can just make stuff up and pretend it’s fact!
Score: 15 Votes (Like | Disagree)

Not saying Apple directly. Just like here on these forums. The forums presented data that showed obvious agenda. The forums (and the replies based on all the "apple can do no wrong - apple is my god") shows obvious bias. I have no bias either way. I prefer iOS but the world prefers Android. It's not a new thing. You can go to any Android forum and see data showing how much better Android is doing than iOS. Platforms sell, and Android and iOS are platforms. If you're incapable of seeing that this is taking a specific piece of data and trying to make it seem like Apple is dominating the industry, then you're a lost cause. The bottom line is yeah, Apple's hardware is outselling Samsung this quarter, but that's because just like a PC people have choices of dozens of hardware. But hey, Apple has spun this data for years.... and the proportionate marketshare globally has shrunk year after year after year. Can Apple survive with 10% marketshare? Absolutely. But it's just like a PC vs Mac... if you've got an Apple logo on your device, you still only make up 10% of the market be it a phone or a computer.

Dude, there’s no agenda. Apple is dominating this industry financially to an extent virtually unheard of since the Standard Oil days. Apple’s not the only one selling phones—not by a long shot—but they are making the most money off of them, by a lot. Apple isn’t the world’s most valuable company by market capitalization because investors just feel like it. They’re a stunningly successful company despite not having the #1 spot in apparently the only statistic that matters, market share, in either of their mobile or desktop OSes.

And once again, as multiple people have pointed out now, Apple had exactly nothing to do with this report or the data presented within it except making/selling the phones from which the data was measured.

Why are you here?

I have no bias either way. I prefer iOS