Apple today announced it has released Final Cut Pro X 10.4 and updated Logic Pro X, Motion, and Compressor alongside the launch of the iMac Pro. 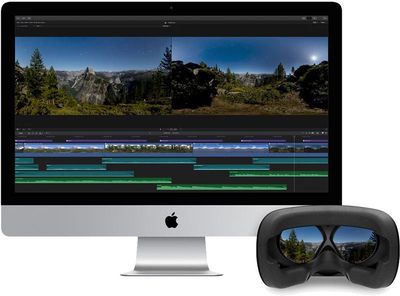 Logic Pro X also has been updated with optimized performance for the iMac Pro, including support for up to 36 cores with hyperthreading. Version 10.3.3 includes performance and stability improvements as well, including a fix for an issue which could cause user-created content to become unavailable on macOS High Sierra.

Motion has been updated with support for 360 VR motion graphics. Users can now import 360° video and design 360° titles, generators, and effects, and later output the 360° video to a connected VR headset. Version 5.4 also supports import, playback, and editing of HEVC video and HEIF photos from Apple devices.

360 VR editing
• Import and edit 360° equirectangular video in a wide range of formats and frame sizes
• Output 360° video to a connected VR headset*
• Open the 360° viewer to simultaneously monitor headset and equirectangular views while editing
• Option to track movement of a VR headset in the 360° viewer in Final Cut Pro
• Add 360° effects including blurs, glows, and more
• Share 360° video directly to YouTube, Facebook, and Vimeo
• Use the 360° patch to instantly remove cameras and rigs from the scene
• Use the Horizon overlay to easily change the orientation of 360° video right in the viewer
• Edit 360° video into a non-360° project and animate the pan, tilt, and zoom
• Place any graphic, still, or video into a 360° project, then reposition and resize to fit perfectly into the 360° scene
• Support for monoscopic and stereoscopic 360° video

Apple's new versions of Final Cut Pro X, Logic Pro X, and Motion, and Compressor are available from the Updates tab in the Mac App Store.

but better late than never, I suppose.

Yes! And, honestly, with Apple we are always on edge, not knowing if TC will randomly drop the wrecking ball on any given app, like he did with Aperture.

But I still can't complain given the price of this update or the one's before it. And unlike some other video apps, there is no subscription fee either, so there is that.
Score: 5 Votes (Like | Disagree)

HEVC! Excellent, I can finally empty my phone.

"Balance Color command includes an eye dropper for manual white balance." I invoked balance color, but I see no white balance picker. Anybody able to find it?

You need to chant the Jony Ives mantra will strutting around naked carrying an apple at dawn on the Winter Solstice and you will be rewarded......
Score: 4 Votes (Like | Disagree)

Abazigal
Umm....finally?!? Surprised that HEVC support took so long to come, but better late than never, I suppose.
Score: 3 Votes (Like | Disagree)

When High Sierra came out I was dismayed to learn that non of my Handbrake HEVC encodes run natively on the Mac. They must have a very specific implementation. (Though the Handbrake nightly builds do now encode in an Apple supported HEVC format).

Apple uses a different fourcc code for some reason (hvc1 instead of hev1), you can make your files compatible without re-encoding using this command.

Kudos to Apple!
Adobe has one job in the world, and they suck!
Score: 2 Votes (Like | Disagree)
Read All Comments