At the Final Cut Pro X Creative Summit, which includes a visit to Apple's Cupertino Campus, Apple announced the next version of its video editing software aimed at professionals, Final Cut Pro X 10.4. Details about the announcement were shared on Twitter by FCPX experts Peter Wiggins, Alex Gollner, and Richard Taylor, giving us a hint of what's coming later this year. 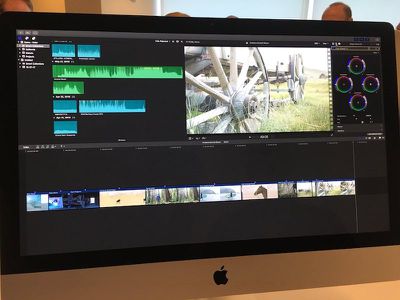 Image via Richard Taylor
The update will include new color tools, like color wheels and a white balance picker, with new controls for the color board. It will include support for HEVC, the new video format introduced in iOS 11 and macOS High Sierra, and direct import of iMovie for iOS timelines. The new version of the software will support VR and HDR workflows.

Apple shared several demos of the new version of Final Cut Pro X in action, including an 8K timeline on the new iMac Pro.

No specific release date for Final Cut Pro X 10.4 was announced, but Apple did say that it's coming before the end of 2017. Final Cut Pro X can be downloaded from the Mac App Store for $299.99. [Direct Link]

HiRez
It may be too late for Apple to regain prominence, I know a lot of people in the industry who bailed to Adobe Premiere in the last 2 years. Our company just moved about 40 FCP seats to Premiere this year. Unfortunately the botched Final Cut X rollout created sticky negative preconceptions about the product that persisted long after Apple fixed and improved much of it.
Score: 12 Votes (Like | Disagree)

OldSchoolMacGuy
It'll be interesting to see how long Apple sticks with the 10.everything scheme.
Score: 9 Votes (Like | Disagree)

simonmet
No matter how good FCPX is or becomes Apple simply won’t regain mass videographer market share without a classic upgradable desktop, much less an all-in-one. Corporate buyers see the risk in proprietary locked-down everything. Certain Mac-centric niche studios may like the iMac Pro but I can’t see it reaching a wider audience than the trash-can Mac Pro.

At this point we should be thankful Apple is still supporting and developing FCPX. I see it as an attractive option for amateur and prosumer users such as the YouTube set. Maybe even indie film makers.
Score: 9 Votes (Like | Disagree)

fitshaced
I use FCPX and so happy to see an improvement to colour tools and white balance. There are plugins that do a really good job but I think these are basic things that should be built in. No need to learn something else now.
Score: 8 Votes (Like | Disagree)

It may be too late for Apple to regain prominence, I know a lot of people in the industry who bailed to Adobe Premiere in the last 2 years. Our company just moved about 40 FCP seats to Premiere this year. Unfortunately the botched Final Cut X rollout created sticky negative preconceptions about the product that persisted long after Apple fixed and improved much of it.

In the long run, it won't matter. FCPX is more for a new generation of editor.
Score: 8 Votes (Like | Disagree)

Msivyparrot
Yes exactly, that is called post purchase upgrading, you upgrade after the initial purchase of the device, this was the idea of the cheesgrater, the macbook pro, with it's replaceable battery and RAM underneath..It was such a great idea, you bought 2GB RAM and then later, upgraded the RAM, or in the cheesgrater, changed everything, as it should.

Apple for some bizarre reason banned post purchase upgrading, the trash can mc pro was not upgradeable, then the mcbookpro was shown the same bizarre love, then the new 2017 imac and mac pro will be totally BTO...BTO is bad...

In the field you need power, both internal and external, you need to drive the laptops hard, editing, and this consumes power, in the old days, with FCP classic, you could switch out batteries, sure the app itself did not benefit from more RAM, being locked down to 2GB RAM, but email, other tasks, having more RAM helped...

Now in 2017 we have a device that is fixed to 8GB RAM [or 16GB] and fixed battery life, and if that runs out, you are **** out of luck...How in a decade is that progress..unless negative progress is what you desire....