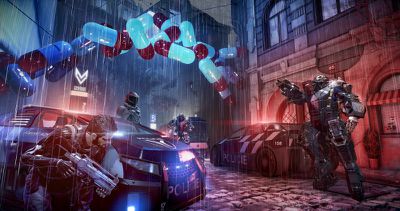 The year is 2029, and mechanically augmented humans are now outcasts, completely segregated from the rest of society.

Now an experienced covert operative, Adam Jensen is forced to operate in a world that has grown to despise his kind. Armed with a new arsenal of state-of-the-art weapons and augmentations, he must choose the right approach, and who to trust, in order to unravel a vast worldwide conspiracy.

Deus Ex: Mankind Divided is available from the Feral Store and Steam for $59.99. The Desperate Measures in-game mission and the Covert Agent pack, which includes various weapons and items, are available for free.

The Digital Deluxe Edition is available from the Feral Store and Steam for $89.99. The Deluxe Edition includes two new story-based DLCs, System Rift and A Criminal Past, as well as the Assault and Tactical packs, which include various weapons and items. On top of that, players get the Desperate Measures in-game mission and the Covert Agent pack, four Praxis kits, 5,000 credits, 1,000 weapon parts, five booster packs, and 20 Chipsets for Breach, a standalone online game mode.

The only caveat seems to be the 15-inch Retina MacBook Pro released in mid 2015 with an AMD Radeon R9 M370X, which Feral says is "capable of running the game but does not consistently meet the standards required for official support".

I have loved every Deus Ex version since 2000.

So I run a 2012 iMac 27" with Nvidia GeForce GTX 680MX with 2 gigs of memory.
I bought the game originally on steam booted into boot camp cuz I liked it so much.
Pleasantly surprised that when I open steam on Mac OS it immeidiatly shows up as available and I can d/l it. We'll see wether or not it will actually play on the Mac OS. But based not their recommended numbers I meet there requirements. I have a Core i7 3.4 well beyond the 3.0 giz Core i5 they recommend and I have a 2 gig video card. So i'll let you know how well it plays if at all.

But, it was perfectly playable booted into windows 7 on this same computer.

It will run, they say it is not supported. It is different from not working
Score: 1 Votes (Like | Disagree)

69Mustang
Feral, doin' God's work for Mac gamers. Good job Feral. I no longer game on Mac, but the efforts are appreciated for those who do.

Unrelated: High rez gaming is great 'cept for the humongous bulk of the file sizes.

This is average. I got ultimate edition of Forza 7. That mofo weighs approx. 100GB
Score: 1 Votes (Like | Disagree)
Read All Comments