Apple's 'TV' App Starts Showing Up for Users in the UK, France, and Germany

Apple's official TV app today started showing up for some fourth- and fifth-generation Apple TV owners in the United Kingdom, France, and Germany, almost a year after Apple originally announced the service in the U.S. 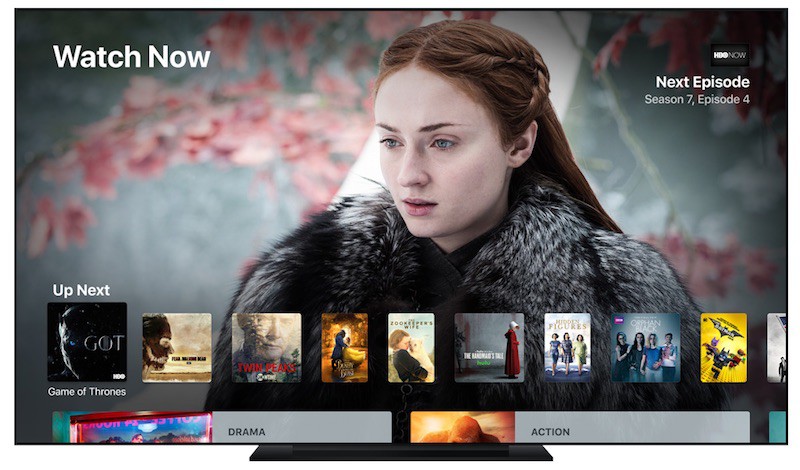 The TV app is billed as an easy way to watch your favorite movies and TV shows in a single place. It offers a unified experience for accessing TV shows and movies across multiple video apps, and aims to help users discover new TV and movie content by offering recommendations based on what they've previously watched. The service syncs content in the cloud so users can pick up where they left off on other devices via the accompanying iOS TV app, which has also been appearing on devices across the pond.

More than 60 services are supported by the U.S. version of the TV app, but with the expansion to new countries, Apple is adding support for additional local content, such as ITV, Channel 5, and BBC iPlayer in the U.K.

it is available on my iphone in germany now! not showing up in ipad though.. pic.twitter.com/ER9nEfpdxM — David Cox (@daviddarrencox) December 8, 2017

Apple's TV app has been available in the United States since December of 2016. In September, Apple released the Apple TV app in Canada and Australia, and announced that it would be bringing the app to France, Germany, Sweden, Norway, and the U.K. by the end of the year.
Related Roundups: Apple TV, tvOS 13
Buyer's Guide: Apple TV (Don't Buy)
[ 179 comments ]

EnglishPsycho
Awesome news! Been waiting too long for this.
Score: 4 Votes (Like | Disagree)

Skeptical.me
Given how bad Hulu's new UI is I totally rely on the TV app. Its such a great tool for finding and keeping up to date with shows I'm watching. Its just a real shame that Netflix won't participate. I reckon we should put together a petition and send it to Netflix lol
Score: 4 Votes (Like | Disagree)

Damn apple always leaving behind the Netherlands.. no Apple News, No TV Shows on itunes, no TV App...

I bet many countries have it worse but it still sucks..

Still waiting for it to appear on mine. Hurry!

WillyVelsen
Damn apple always leaving behind the Netherlands.. no Apple News, No TV Shows on itunes, no TV App...

I bet many countries have it worse but it still sucks..
Score: 3 Votes (Like | Disagree)

vertical smile
I wished the TV app was more family/multi-user friendly on the tvOS.

It is basically useless on a family TV.
Score: 2 Votes (Like | Disagree)
Read All Comments

Tuesday May 26, 2020 2:31 am PDT by Tim Hardwick
Apple will use a Lightning port instead of USB-C in the upcoming "iPhone 12," but it will be the last major series of Apple's flagship phones to do so, with models set to combine wireless charging and a port-less Smart Connector system for data transfer and syncing in the iPhone "13 series" next year. The above claim comes from occasional Apple leaker and Twitter user "Fudge" (@choco_bit),...
Read Full Article • 322 comments

Tuesday May 26, 2020 5:30 am PDT by Joe Rossignol
Apple plans to release several higher-end devices with Mini-LED displays in 2021, including a new 12.9-inch iPad Pro in the first quarter, a new 16-inch MacBook Pro in the second quarter, and a new 27-inch iMac in the second half of the year, according to Jeff Pu, an analyst at Chinese research firm GF Securities. This timeframe lines up with one shared by analyst Ming-Chi Kuo, who recently...
Read Full Article • 74 comments

Monday May 25, 2020 2:53 am PDT by Tim Hardwick
Apple is reportedly looking to integrate light sensors in a new model of AirPods in the next couple of years, according to a new report today, suggesting their use could be part of rumored upcoming health monitoring features in the true wireless earbuds. In a paywalled article, DigiTimes reports that ASE Technology could be involved in manufacturing the sensors: Apple is expected to...
Read Full Article • 30 comments