Apple is opening a new store at the Crabtree Valley shopping mall in Raleigh, North Carolina this weekend, as part of its efforts to modernize its chain of nearly 500 retail locations around the world. 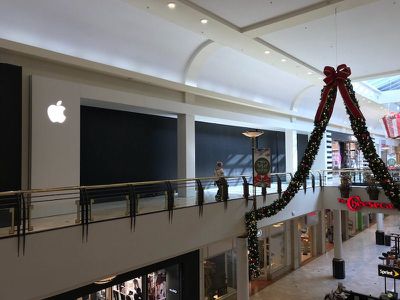 Apple's upcoming store at Crabtree Valley via Will Sigmon
The new store will celebrate its grand opening on Saturday, December 9, likely at 8:00 a.m. local time, according to Slice podcast co-host Will Sigmon.

Apple is moving into approximately 9,000 square feet of space, nearly double the size of its current store at Crabtree, which opened in June 2006. The new location will be next to Sephora on the second level.

All of Apple's stores opened since September 2015 have been based on the updated aesthetic. Apple has also renovated or relocated around 50 existing stores around the world as part of the modernization of its retail chain.

Apple has one other store in The Triangle at The Streets at Southpoint in Durham, along with two stores in Charlotte and one in Greensboro.

DavidLeblond
I remember when Crabtree was the place to be. I only go like once every other year now though. Maybe I'll have to check the new store out once Christmas is over with (I don't step foot in any of the malls during December.)
Score: 3 Votes (Like | Disagree)

ryannel2003
I usually go to Southpoint because parking at Crabtree has always been a pain. I’ll check the new store out soon though.
Score: 2 Votes (Like | Disagree)

convergent
Definitely needs the extra space. Its always a bit crowded in there. I used to go in there often, but I've only been in it one time since I went in there and every screen in the place was on a Carpool Karaoke loop. That was part of the realization that Apple has moved to a place that I'm not at.
Score: 1 Votes (Like | Disagree)