Apple today released Security Update 2017-001 to fix a serious vulnerability that enables access to the root superuser account with a blank password on any Mac running macOS High Sierra version 10.13.1. 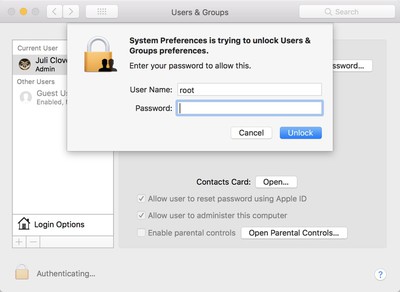 The critical bug, which gained attention after it was tweeted by developer Lemi Ergin yesterday, lets anyone gain administrator privileges by simply entering the username "root" and a blank password in System Preferences > Users & Groups.

Apple has since apologized for the vulnerability in a statement issued to MacRumors:

Security is a top priority for every Apple product, and regrettably we stumbled with this release of macOS.

When our security engineers became aware of the issue Tuesday afternoon, we immediately began working on an update that closes the security hole. This morning, as of 8 a.m., the update is available for download, and starting later today it will be automatically installed on all systems running the latest version (10.13.1) of macOS High Sierra.

We greatly regret this error and we apologize to all Mac users, both for releasing with this vulnerability and for the concern it has caused. Our customers deserve better. We are auditing our development processes to help prevent this from happening again.

The vulnerability does not affect macOS Sierra or any other previous version of the operating system.

I wish Apple did a better job testing their releases. We used to enjoy such high quality when it came to software updates and releases.
Score: 42 Votes (Like | Disagree)

And it was utterly necessary that it be just that.
Score: 36 Votes (Like | Disagree)

I wish Apple did a better job testing their releases. We used to enjoy such high quality when it came to software updates and releases.

You ever heard of Windows? Perhaps you should read up on that OS if you haven't.

Also, give me a break. Nobody finds everything, not even "Apple". Patched quickly and painlessly. Move along.
Score: 31 Votes (Like | Disagree)

You ever heard of Windows? Perhaps you should read up on that OS if you haven't.

Also, give me a break. Nobody finds everything, not even "Apple". Patched quickly and painlessly. Move along.

Three... count 'em... THREE... critical and ridiculous security issues with Mac OS High Sierra within as many months. This one, the Disk utility one, and the keychain one. And that's just the security issues...

There's no excuse for it. Saying "well, microsoft is just as bad" just means that Apple is stooping to Microsoft's level... but I'd actually venture to say that Apple is starting to get worse than Microsoft when it comes to Mac OS vs Windows.
Score: 13 Votes (Like | Disagree)

discuit
This is actually an argument in favor of public disclosure of vulnerabilities. Lemi Orhan Ergin was catching a lot of criticism yesterday for posting it on twitter, but if this bug had been reported privately, it would have taken much longer to fix, while malicious actors would be able to exploit it all along.
Score: 10 Votes (Like | Disagree)
Read All Comments

Monday July 19, 2021 1:31 am PDT by Sami Fathi
Apple plans to update the iPhone SE, its 4.7-inch entry-level iPhone, with an updated A14 Bionic processor from the iPhone 12 series in the first half of next year, according to a report from DigiTimes. DigiTimes' report follows in the footsteps of reliable Apple analyst Ming-Chi Kuo, who reported last month the iPhone SE would receive an updated processor and 5G capabilities in the first...
Read Full Article • 77 comments

Sunday July 18, 2021 8:26 am PDT by Sami Fathi
Following a successful supercycle launch of the iPhone 12 last year, Apple aims to make another "big splash" with its upcoming 2021 iPhones, which can be expected to feature larger batteries, smaller notches, improved performance, and more advanced displays that may sport an always-on mode. In the latest publication of his weekly Power On newsletter, Bloomberg journalist Mark Gurman...
Read Full Article • 145 comments

Wednesday July 21, 2021 6:50 am PDT by Hartley Charlton
Upcoming AirPods Pro firmware updates are now available to Apple Developer Program members as beta versions. AirPods Pro firmware beta one features FaceTime Spatial Audio and Ambient Noise Reduction. Custom Transparency mode, including Conversation Boost, was initially expected to be included in the beta but appears to have been delayed for a later version. Apple made the announcement...
Read Full Article • 35 comments

Monday July 19, 2021 10:06 am PDT by Juli Clover
Apple today released iOS 14.7, marking the seventh major update to the iOS operating system that came out in September 2020. iOS 14.7 comes two months after the launch of iOS 14.6, a major update that added Apple Card Family Support, Podcast Subscriptions, and more. The iOS 14.7 update can be downloaded for free and the software is available on all eligible devices over-the-air in the...
Read Full Article • 87 comments

Tuesday July 20, 2021 11:14 am PDT by Juli Clover
The new MagSafe Battery Pack that Apple debuted this week is arriving to customers starting today and it's also now available for in-store pickup in many Apple retail locations around the world. We snagged one this morning and thought we'd take a look at it to let MacRumors readers know if it's worth the $99 asking price. Subscribe to the MacRumors YouTube channel for more videos. As the name ...
Read Full Article • 111 comments