Apple today announced that it is opening an all-new retail store in Downtown Brooklyn next weekend following several months of construction. 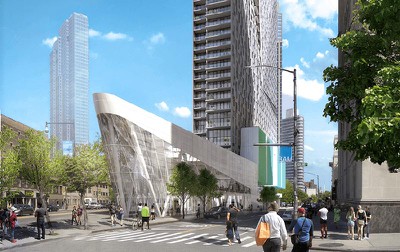 300 Ashland
The store is located in the new 300 Ashland building in the Fort Greene neighborhood of Brooklyn, with an official address of 123 Flatbush Avenue. The grand opening will occur Saturday, December 2 at 10:00 a.m. local time.

The store will be Apple's second in Brooklyn alongside its Williamsburg location opened in July 2016. It will also be Apple's 11th store in New York City, with seven locations in Manhattan, one in Queens, and one on Staten Island.

The store is situated near the LIRR's Atlantic Terminal and Barclays Center, home to the NBA's Brooklyn Nets and the NHL's New York Islanders.

Apple has also announced that its store in the Shibuya neighborhood of Tokyo has temporarily closed for renovations. Apple recommends customers visit its nearby Omotesando store during the modernization process.

In related news, Japanese blog Mac Otakara claims that Apple is planning to open a store in Kyoto, Japan by 2019, and possibly two other stores in Tokyo in time for the 2020 Summer Olympic Games in the city.

Apple Downtown Brooklyn is the company's 499th retail store location around the world if the new Visitors Center at Apple Park is included.

I don't get it, is that a rendering of the store?

I can't imagine it is, as it looks really ugly... Are there more renders or photos?

magicschoolbus
Will they have unicycle parking? That's important in Brooklyn.
Score: 5 Votes (Like | Disagree)

I can't wait for pictures of the inside!

That is a great location. Tons of shopping happens in the Fulton Mall right near there and then there are folks going to the Barclay Center and BAM near by as well. This will be a very busy store.

It will be interesting to see how well it handles crowds from sporting and entertainment events at the Barclay Center and BAM. I was hoping for Downtown Brooklyn to get an Apple Super Store given all the construction in the area the last few years. This seems like a rather small store.
Score: 3 Votes (Like | Disagree)

You'll want to educate yourself on urban planning. The mixing of the rich and poor is proven to generate the most socially and economically resiliant communities.

It's not the people that make a community resilient, it the availability of meaningful local employment. Without the presence (non-minimum wage) employment to fuel the local economy, no amount of "social mixing" will make keep a community together.
Score: 2 Votes (Like | Disagree)
Read All Comments