The latest TV streaming service, Philo, will provide subscribers with a cost that undercuts the price of competing "over the top" services by excluding sports-related content (via Business Insider). This means Philo starts at $16/month for access to 37 entertainment networks, which you can watch on your iPhone, MacBook, connected TV, Roku, and soon the Apple TV. 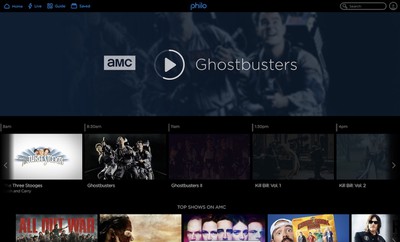 Philo started by providing programming to college students on campuses across the United States, and is led by CEO Andrew McCollum, who was a founding member of Facebook. The company gained strategic investments totaling $25 million from five programming partners, including A+E, AMC, Discovery, Scripps, and Viacom. Every channel in the basic $16/month tier is listed below:

For $20/month you can watch everything listed above, with the following channels added:

Because TV providers sell content in bundles, Philo's lack of sports programming also hinders some of its entertainment offerings, including any channels owned by Disney and Fox. There also won't be any content from CBS or NBCUniversal. Still, Philo comes in quite low when compared to starting prices of other services like Hulu Live TV ($40/month) and YouTube TV ($35/month), and is more competitive with Sling TV's low-tier offerings ($20/month).

In terms of features, Philo lets you watch any channel live or save an episode of any show onto a DVR with storage that lasts for 30 days. You can also stream in HD on up to three devices at once. Although not appearing at launch, Philo also plans to debut a "Social TV" aspect in the future, with subscribers able to see which episodes their friends are on in a TV show, see a friends list of users actively watching something, and synchronize viewing of an on-demand show with a friend. Social TV features are expected to launch in 2018.

More information on Philo can be found on the company's website here, including a seven day free trial.

I admire them for what they’re trying to do, but a more accurate summary would be “No sports channels and none of the major networks.”

If ABC, NBC, CBS and FOX won’t play nice, the service is a bit hobbled.

I realize not everyone has access to it, but an over the air antenna will give plenty of people local networks broadcast in quality superior to what any streaming service can offer. For free.
Score: 6 Votes (Like | Disagree)

jimothyGator
I want the opposite: Sports only streaming. I've got Netflix (like AllergyDoc, free through T-Mobile) and Amazon, and I don't care for the so-called reality TV programming that's taken over cable TV.

unobtainium
I admire them for what they’re trying to do, but a more accurate summary would be “No sports channels and none of the major networks.”

If ABC, NBC, CBS and FOX won’t play nice, the service is a bit hobbled.
Score: 5 Votes (Like | Disagree)

I want the opposite: Sports only streaming. I've got Netflix (like AllergyDoc, free through T-Mobile) and Amazon, and I don't care for the so-called reality TV programming that's taken over cable TV.

Might be interesting to do that. I'm not sure which stations (if any) I'd get over the air, but could save me quite a bit of money.

There are some web sites that will show you what is available at your address with an OTA antenna. Here’s one I’ve used in the past:

WWPD
No thanks, I hate commercials. Hulu commercial free and Netflix have spoiled me.
Score: 3 Votes (Like | Disagree)
Read All Comments