iPhone X Shipping Estimates Improve to 2 to 3 Weeks in Europe, US Could Be Next [Updated]

The new 2 to 3 week shipping estimates are available in all European countries where the device has launched, including the UK, Italy, France, Germany, Spain, Denmark, Sweden, Norway, Switzerland, the Netherlands, and more. 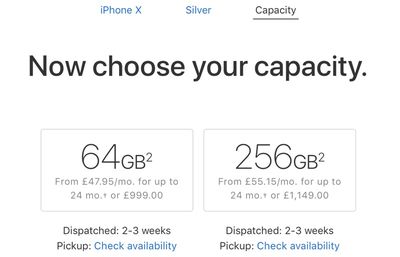 iPhones ordered today in these countries will arrive well ahead of the holidays, in early December.

In addition to improving shipping estimates from devices purchased from the online Apple Store, we've also been hearing continual reports from MacRumors readers who have seen their pre-ordered iPhone X models shipping out much sooner than expected. Many who originally had December shipping estimates have already received their devices or are expecting them in November.

Apple retail stores are also receiving regular shipments and customers who check stock on Apple.com early and use stock-tracking tools like iStockNow have been able to make purchases with no wait time.

Back in early November, Apple CEO Tim Cook said Apple was working to ramp up iPhone X production week by week, with the aim of getting the new smartphone out to customers "as soon as possible."

Ahead of the iPhone X launch, rumors suggested the device would be heavily constrained and in short supply until well into 2018, but given the improvements we're already seeing, supply/demand balance could be reached earlier than originally expected.

jicon
Price outside of the US is criminal. Bump up the US prices another 30%, and I'm sure the wait times will decrease state side just as easily.
Score: 22 Votes (Like | Disagree)

T Coma
Did my part to help the Apple faithful and other beta testers here in NA. Every little bit helps!

nabeel24
Can they release the Sim Free model now?
Score: 12 Votes (Like | Disagree)

barkomatic
Wow, this is unexpected. So much for the dire supply shortages and people reselling iPhone X's for $5000.
Score: 11 Votes (Like | Disagree)

CmdrLaForge
Or orders are not as strong as anticipated...
Score: 8 Votes (Like | Disagree)

CWallace
Nice, but I picked up an 8 Plus yesterday to replace my 6 Plus and I'm content.