Apple design chief Jony Ive recently sat down for an interview with design, architecture, and fashion magazine Wallpaper* to discuss Apple Park, Apple's newest campus in Cupertino, California which he had a hand in designing, and the iPhone X, Apple's newest device.

The iPhone X, Ive says, was designed to serve as a vessel for software, with a design that melds into the background. Apple's design team has always aimed to "get design out of the way." "We try to define a solution that seems so inevitable that it does recede," he said. In the future, Ive believes the iPhone X will offer capabilities it doesn't have now because software is always evolving, something he finds intriguing and fascinating. 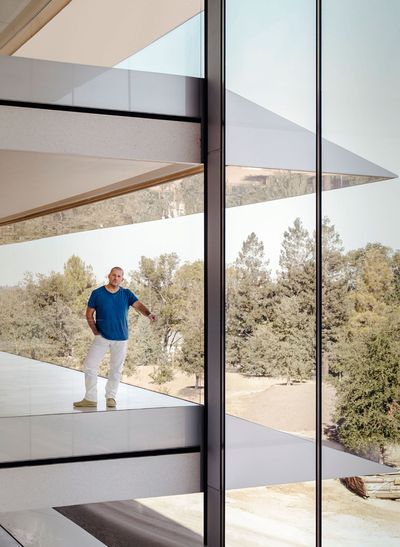 What I think is remarkable about the iPhone X is that its functionality is so determined by software. And because of the fluid nature of software, this product is going to change and evolve. In 12 months' time, this object will be able to do things that it can't now. I think that is extraordinary. I think we will look back on it and see it as a very significant point in terms of the products we have been developing.

Ive declined to comment on Apple's future product plans, but he said his design group is "absurdly curious and constantly looking for alternatives." Some ideas are "beyond the technology" at the moment, but exist to "galvanise the development of technology." Reflecting on the past, Ive says that looking back on the past 25 years, what Apple has learned is more important and precious than what's been designed.

Ive is described as "giddily excited" about the new campus and its enormous ring-shaped main building and the potential it has to change the way Apple employees work by bringing them together. Design studios that are currently physically disconnected will be able to come together, so industrial designers can work with font designers, sound designers, motion graphics experts, and so on.

Ive says Apple Park has been designed to be inherently flexible and reconfigurable, with Apple able to "very quickly" create large open spaces or lots of smaller private offices. "The building will change and evolve," says Ive. "I'm sure in 20 years' time we will be designing and developing very different products, and just that alone will drive the campus to evolve and change."

Wallpaper*'s latest cover, designed by Ive
There were rumors suggesting some Apple Park employees were dissatisfied with the open office design at Apple Park, so much so that Apple vice president of hardware technologies Johny Srouji insisted his team work at a different location, but the Wallpaper* piece mentions several times that office space within the main building is configurable, with teams able to choose individual offices or open spaces.

Apple will, however, maintain its culture of secrecy. "The way that we work is quietly," said Ive. "We are conspicuously different in that and it is an important part of who we are."

Ive's full interview with Wallpaper* is well worth reading and offers further discussion about the Apple Park campus and the attention to detail that went into its design. It also looks further at the various elements of Apple Park, including the Steve Jobs theater, the landscaping, and the configuration of the building.

brian3uk
"Get design out of the way" says the notch as it juts into your photos and videos.
Score: 90 Votes (Like | Disagree)

rpat701
Most overrated dude ever in business and design.
Score: 45 Votes (Like | Disagree)

sniffies
iPhone X will "change and evolve" over time with the addition of 2 new Animojis, a breakthrough Animoji Karaoke app, and a redesigned Apple Notch™ 2.0
Score: 42 Votes (Like | Disagree)

ugahairydawgs
I chuckle at the caption that he "designed" the magazine cover.
Score: 40 Votes (Like | Disagree)
Read All Comments