Since the beginning of October, Apple employees have been testing Apple Pay Cash in a special version of iOS 11.1 that allowed the feature to be enabled through an internal device certificate. The test was initially limited to corporate employees, but later expanded to retail employees. Apple Pay Cash did not end up shipping in iOS 11.1, but it is apparently ready for iOS 11.2. 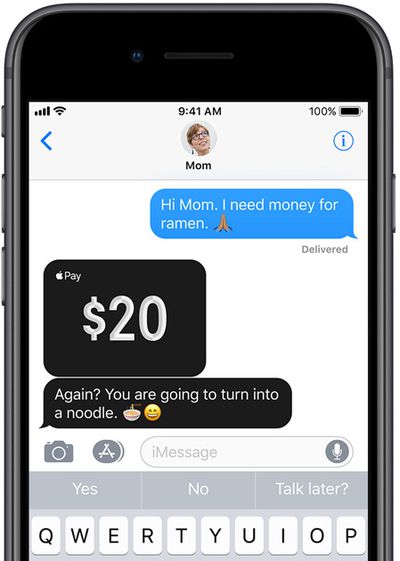 Cash can be sent from a linked debit or credit card, while received cash is stored in an Apple Pay Cash card in Wallet that can be used for purchases or sent to a bank account. Sending cash through a credit card incurs a 3% fee, while sending cash from a debit card is free.

The Apple Pay Cash card available in Wallet is being made available through a partnership with Green Dot, a company that offers prepaid Discover cards. For Apple Pay Cash to work, both parties need to have the feature enabled and activated. Money can only be sent in a one-on-one message, with Apple Pay Cash not available in group messages.

Apple Pay Cash will also be available on the Apple Watch with watchOS 4.2, and users can send cash directly from the Messages app on the wrist-worn device.

To use Apple Pay Cash in today's beta, both people will need to be running the iOS 11.2 public beta. $10 minimum must be loaded onto the Apple Pay Cash card in Wallet, two-factor authentication must be turned on, and an iPhone 6 or later is required. Apple Pay Cash is limited to the U.S. at this time.

sniffies
What ever happened to iCloud iMessage???
Score: 40 Votes (Like | Disagree)

I wouldn’t touch these new pay systems with a 10 mile barge pole with iOS 11 in it’s current bug filled mess! I haven’t had Apple Pay work since the last update...

I tried to watch a You Tube video on Touch Arcades website the other day and it crashed Safari completely...

It’s an utter fudging mess, I have never had as many crashes and bugs in several years of iOS use as I have had with iOS 11!!

Bummer, my experience has been exactly the opposite. Most places I shop take ApplePay, and have had 0 issues on iOS 11 or WatchOS 4.1. Sorry you've had a bad experience.
Score: 33 Votes (Like | Disagree)

Why would someone use this over PayPal?

OldSchoolMacGuy
BRB, using my twin's phone to steal their money thanks to failures of FaceID.
Score: 15 Votes (Like | Disagree)

PizzaBoxStyle
That child is never going to learn how to budget and save properly if their mother continues to send then cash for ramen on demand like that. :D
Score: 11 Votes (Like | Disagree)
Read All Comments