The issue has been documented in several threads on the MacRumors forums and on reddit, and we've also been able to replicate it on our own devices. 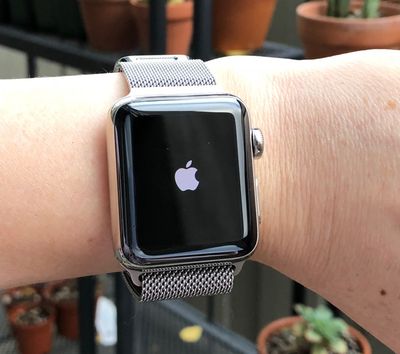 Complaints about the problem appear to have started this morning, and the bug is confirmed to be affecting both LTE and GPS Apple Watch Series 3 models as well as older Apple Watch models running watchOS 4.1. Not all Apple Watch owners in all countries are affected, but it appears to be impacting users in the United States, Canada, and Europe.

It's not yet clear what's causing the issue, but the weather app itself is working fine, and restarting and resetting the watch don't appear to fix the problem. From MacRumors forum member SRLMJ23:

However, this bug appeared today because yesterday everything was working fine when I asked Siri "What is the forecast for today" or "What is the temperature right now."

I am sure Apple will fix this pretty quick!

I have an Apple Watch Series 3 + LTE/GPS. Very odd bug, cannot wait to see what Apple has to say about this.

Curiously, asking Siri about the weather tomorrow or next week doesn't cause a problem -- it's only questions about the current weather conditions that are resulting in errors. It's possible that this is an issue related to the upcoming time change, as one reddit user has discovered. Daylight Saving Time is set to end on Sunday, November 5 in many regions in the United States and Canada.

Okay, I think I've figured it out. It's a bug related to the end of Daylight Saving Time. If I ask for the weather in Saskatoon, Saskatchewan, it works. If I ask for the weather in Winnipeg, Manitoba, it crashes. Saskatchewan doesn't observe DST. I think if a time change is set to occur within 24 hours in the city you're asking about, it will crash.

Apple will likely have this fixed shortly (or it'll clear up after Sunday), but for now, it's best to avoid using the watch to ask questions about the weather in order to prevent sudden resprings.

mistasopz
That's pretty terrible. Apple's own apps running on their hardware and ecosystem can't even give you the weather forecast without crashing.
Score: 18 Votes (Like | Disagree)

burgman
Read the article and the posts. Sitting an airport lounge and bored. Siri what’s the weather today. Yup restarted let’s start a drinking game about this.
[doublepost=1509843009][/doublepost]

It did it to me today while I was driving. "Just use your phone" isn't an option while driving.

At least it should be OK tomorrow.

You could look out the window ;)
Score: 9 Votes (Like | Disagree)

oldmacs
This is why I don't trust Apple to build a car.
Score: 8 Votes (Like | Disagree)

katbel
Just tried it and my watch is restarting right now..It's snowing today , maybe it's a little too early for the watch too :eek:
Canada, West Coast
Score: 4 Votes (Like | Disagree)
Read All Comments

Thursday September 29, 2022 12:38 pm PDT by Juli Clover
Tony Blevins, Apple's vice president of procurement, is set to depart the company after he made a crude comment about his profession in a recent TikTok video, reports Bloomberg. Blevins was in a video by TikTok creator Daniel Mac, who was doing a series on the jobs of people he spotted with expensive cars. After seeing Blevins in an expensive Mercedes-Benz SLR McLaren, Mac asked Blevins what ...
Read Full Article • 731 comments

Sunday October 2, 2022 6:41 am PDT by Joe Rossignol
Apple is developing new iPad Pro, Mac, and Apple TV models, and at least some of these products will be released in October, according to Bloomberg's Mark Gurman. However, Gurman continues to believe that Apple is unlikely to hold an event this month. In the latest edition of his Power On newsletter, Gurman said "the big iPhone 14 unveiling last month was probably it for Apple in 2022 in...
Read Full Article • 132 comments