Apple today released the first public beta of iOS 11.2 to its public beta testing group, one day after seeding the beta to developers and more than a month after releasing the iOS 11 update. The new iOS 11.2 beta comes just after the release of iOS 11.1, which was provided to the public yesterday.

Beta testers who are members of Apple's beta testing program will receive the iOS 11.2 beta update over-the-air after installing the proper certificate on an iOS device. 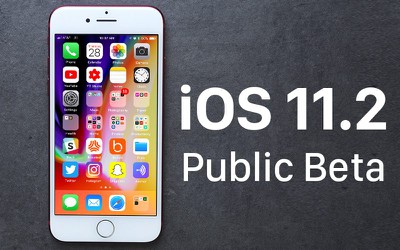 While there are several major features that Apple has promised will come in later iOS 11 updates, including AirPlay 2, peer-to-peer Apple Pay, and iCloud support for iMessages, none of these features appear to be present in the current iOS 11.2 beta.

The iOS 11.2 update fixes an animation bug in the Calculator app that caused some numbers and symbols to be ignored when entered in rapid succession. The update removes the animations from the calculator app so calculations can be done quickly with no need to pause between entering numbers to obtain the correct result.

In addition to the Calculator bug, iOS 11.2 introduces a new Now Playing option for controlling content on the Apple TV in Control Center, redesigned camera emoji, and a new loading animation for Live Photos effects.

is icloud messages really going to let windows users imessage from the browser on PC?

No. That's not what iCloud for Messages means - though you're forgiven, because that's what a lot of us wanted it to mean when it was announced. In reality, it just means your conversations sync between devices via iCloud. For example, at the present moment, if you delete a conversation on one device it still exists on all others. iCloud for Messages fixes that and keeps everything synced. Also because on Apple Watch you end up with a gigantic list of conversations in Messages because it's too much effort to delete conversations on AW.
Score: 8 Votes (Like | Disagree)

mikesch
If you’re getting an iPhone X on Friday, don’t update to this beta. I just checked the public beta XML on Apple‘s servers and the iPhone X identifiers (iPhone10,3 and iPhone10,6) can’t be found in there. There also isn’t any sign of iPhone X support for the developer beta, neither in the XML nor in the restore images listed in the Apple Developer portal.

So, if you update to iOS 11.2 beta, be aware that iPhone X support might not be added until beta 2. If your old iPhone is running iOS 11.2, you might not be able to restore that backup to iOS 11.1 on iPhone X.
Score: 8 Votes (Like | Disagree)

WannaGoMac
How about a turn off all iOS animations setting for older iPhones? :)
Score: 7 Votes (Like | Disagree)

calzon65
It's great to see the versions being released and tested, I'm sure when we get to 11.3.3 we will finally have a stable version along with 10,000 more emojis :cool:
Score: 7 Votes (Like | Disagree)

So basically nothing important.

Well it depends on what you view as important. Apps fixed, security updates, performance? Any of those important? If no, then yeah, no new emojis sorry :)
Score: 4 Votes (Like | Disagree)

No. That's not what iCloud for Messages means - though you're forgiven, because that's what a lot of us wanted it to mean when it was announced. In reality, it just means your conversations sync between devices via iCloud. For example, at the present moment, if you delete a conversation on one device it still exists on all others. iCloud for Messages fixes that and keeps everything synced. Also because on Apple Watch you end up with a gigantic list of conversations in Messages because it's too much effort to delete conversations on AW.

The even bigger perk that I believe most people are waiting for, is that if you do a clean install of your device then iMessages will sync back down like photos/contacts/everything else. Currently, not wanting to lose messages is why I and many others always restore from a backup and never set up as new.
Score: 4 Votes (Like | Disagree)
Read All Comments