Apple is facing a lawsuit for infringing on an existing Animoji trademark, reports The Recorder. Animoji is the name Apple chose for the 3D animated emoji-style characters that will be available on the iPhone X.

The lawsuit [PDF] was filed on Thursday by law firm Susman Godfrey LLP on behalf of Enrique Bonansea, a U.S. citizen living in Japan who owns a company called Emonster k.k. Bonansea says he came up with the name Animoji in 2014 and registered it with the United States Patent and Trademark Office in 2015. 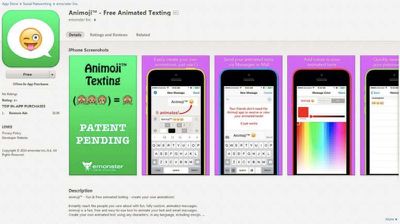 Since 2014, Bonansea has been using the Animoji name for a messaging app available in the iOS App Store. The lawsuit alleges Apple was aware of the Animoji app and attempted to purchase the Animoji trademark ahead of the unveiling of the iPhone X.

This is a textbook case of willful, deliberate trademark infringement. With full awareness of Plaintiffs' ANIMOJI mark, Apple decided to take the name and pretend to the world that "Animoji" was original to Apple. Far from it. Apple knew that Plaintiffs have used the ANIMOJI mark to brand a messaging product available for download on Apple's own App Store.

Indeed, Apple offered to buy Plaintiffs' mark but was rebuffed. Instead of using the creativity on which Apple developed its worldwide reputation, Apple simply plucked the name from a developer on its own App Store. Apple could have changed its desired name prior to its announcement when it realized Plaintiffs already used ANIMOJI for their own product. Yet Apple made the conscious decision to try to pilfer the name for itself--regardless of the consequences.

Bonansea's Animoji app has been downloaded more than 18,000 times, he says, and it continues to be available in the App Store. The app is designed to send animated texts to people.

In the summer of 2017, ahead of the unveiling of the iPhone X, Bonansea was allegedly approached by companies with names like The Emoji Law Group LLC who attempted to purchase his Animoji trademark, and he believes these entities were working on behalf of Apple.

He opted not to sell, though he says he was threatened with a cancellation proceeding if he did not. On September 11, just prior to the debut of the iPhone X, Apple did indeed file a petition with the U.S. Patent and Trademark Office to cancel the Animoji trademark.

Apple's Animoji
Bonansea originally trademarked the name under a Washington corporation called "emonster, Inc," a company that is now defunct. Apple's petition to cancel argued that the "emonster Inc" company did not exist when the Animoji registration was initially filed, and Bonansea claims that it was a mistake the trademark was not filed under the name of his Japanese company, Emonster k.k. A cancellation proceeding for the trademark appears to still be pending.

The lawsuit suggests that Bonansea planned to release an updated Animoji app at the end of 2017, but had to rush to submit a new app "so that Apple did not further associate the Animoji mark in the public's minds with Apple." He claims this has caused suffering and "irreparable injury" as he has had to rush to market with an unfinished product. Bonansea is seeking preliminary and permanent injunctions to prevent Apple from using the Animoji name along with damages and attorney fees.

otech
Unlike most of these lawsuits, this one seems reasonable.

I am sure the trademark/IP owner in this case would be able to work out a reasonable settlement, likely already factored in by the legal team at Apple when they used it.

Apple would have done a search on the name before using it and did so fully aware of the owners rights to it.
Score: 62 Votes (Like | Disagree)

marty11
Whenever Tim Cook tries to act like a progressive, remember he knew he was stealing this trademark from the little guy and could care less.
Score: 45 Votes (Like | Disagree)

yadmonkey
I don't think that people understand the significance of this case. Even by conservative estimates, the human race will communicate exclusively by emojis by 2022. Whoever controls Animojis will control the world. #sadpanda
Score: 21 Votes (Like | Disagree)

JadawinUK
THIS is Apple. Not that magical, is it?
Score: 17 Votes (Like | Disagree)

berrymetal
His app icon is a mixture of the iOS messages icon and an emoji designed by Apple. I think Apple should also sue him ❤️
Score: 16 Votes (Like | Disagree)

mwd25
Oh jeez, every time I open my browser Im seeing another story about someone trying to cash in by suing Apple, except..........Apple seems to be wrong on this one. I guess they tried to do the right thing and buy name off the guy. So he didnt sell, ok. The solution isnt to just take the name anyway!!! Come on, Apple. Your better than this. Or at least you claim to be. Leave him with his name. Call it Emojimations, or a million other things you could come up with. Its just a dumb little feature. Dont lower yourself over this.
Score: 16 Votes (Like | Disagree)
Read All Comments

Tuesday October 4, 2022 3:30 am PDT by Hartley Charlton
The European Parliament today voted overwhelmingly in favor of enforcing USB-C as a common charging port across a wide range of consumer electronic devices, including the iPhone and AirPods, by the end of 2024. The proposal, known as a directive, forces all consumer electronics manufacturers who sell their products in Europe to ensure that a wide range of devices feature a USB-C port. This...
Read Full Article • 335 comments