Last year, popular accessory maker Twelve South introduced a candle that promised to deliver a "New Mac" scent. The limited time product was so popular among Apple aficionados that it quickly sold out. 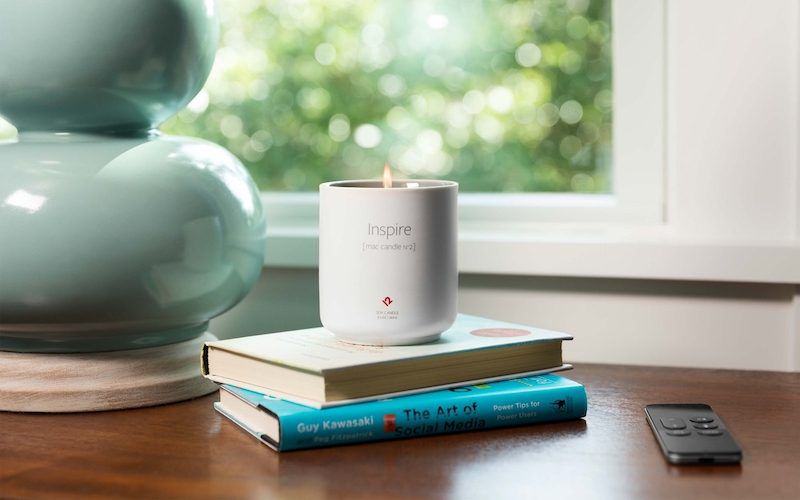 Twelve South is back at it again this year with a new "Inspire" candle, which it refers to as Mac candle N°2. Made from 100 percent soy wax, it is said to give off strong notes of bergamot, lemon, and tarragon.

This year's candle won't smell like a freshly unboxed MacBook. Rather, Twelve South says each scent profile was chosen for its ability to help clear your mind of clutter and stimulate creativity in the home or office.

Twelve South said the new candle is a "small tribute to the Mac," and it shared a quote from late Apple co-founder Steve Jobs.

In the act of making something with a great deal of care and love, something is transmitted there, and it's a way of expressing… our deep appreciation.

The candle is available for $29.99 on Twelve South's website in the United States. It has an approximate burn time of 60-70 hours.

30 bucks for a candle. Some people must have too much money!

I don’t go to movies and don’t drink beer. I’ve got tons of money for candles!
Rating: 15 Votes

It's embarrassing the way people on this forum rant on so many products as pointless and expensive. Instead of tearing down the people who made it or would buy it, why not simply choose to move on, without detracting from others?

Chose any post - and you want, click on it and read the top comments - every single one will be negative and moaning.

It's not even anti Apple stuff either, it's anti anything and everybody. This forum must be full of the most miserable people on earth.
Rating: 8 Votes

JustinKent
I own the original candle and I really like it. It was a gift from somebody close to me, and when I use the candle, I think of that person. The "New Mac" scent makes for a cool conversation piece.

It's embarrassing the way people on this forum rant on so many products as pointless and expensive. Instead of tearing down the people who made it or would buy it, why not simply choose to move on, without detracting from others?

Another Steve Jobs quote: "By the way, what have you done that's so great? Do you just criticize others work and belittle their motivations?" Many of these ranters clearly have never created a product themselves, and a lot of them also appear to be broke curmudgeons that don't get much enjoyment out of life.
Rating: 6 Votes

testcard
I'm hoping Twelve South will do something similar when the iPhone X goes on sale - the scent of a melting credit card. What a time to be alive.
Rating: 6 Votes

I don’t go to movies and don’t drink beer. I’ve got tons of money for candles!


Agreed. It is all about priorities. Yours may not match mine, and that's okay.

Obviously you can spend your money for whatever. I was just very surprised by the pricing. What’s an expensive candle then?

I have a couple that were around $60, which is what I would consider high-end. One was a gift from a dear friend, which is nice because I think of her when I see it. Many of my candles are around $25-30, but I have others that are less.

I like them, and they are a priority for me. Someone else might think nothing about spending $120 to drink beer and play pool one night. Just different priorities - we all have them.

KrispE00
I glanced at the title and thought “Oh, a HomeKit candle.”
Rating: 3 Votes

Sadly I am finding this to be true for almost anything on the internet that allows people to comment. Sad really.


And if you post anything positive you're called a "fan boy" or an "apologist" :rolleyes:
Rating: 2 Votes

And if you post anything positive you're called a "fan boy" or an "apologist" :rolleyes:


True story right there! Never really ceases to amaze me. The ability to say what you want to anyone, knowing no repercussion will come about it, pretty disturbing. I just dropped my twitter account as it was no longer fun anymore. Facebook is next.
Rating: 2 Votes

ignatius345
Maybe donate $30 to the charity of your choice before flushing it down the toilet like this.
Rating: 2 Votes
[ Read All Comments ]