Greenpeace Gives Apple a B- in 'Guide to Greener Electronics'

Among all of the companies Greenpeace evaluated for energy, resource consumption, and chemicals, Apple received the second best marks, trailing behind only Fairphone, a device designed with minimal environmental impact in mind. 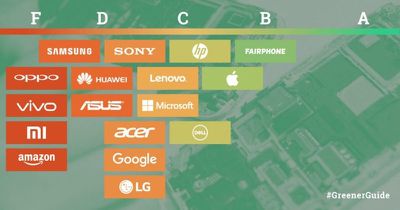 Apple was lauded for its commitment to renewable energy and reducing supply chain emissions and its efforts to be transparent about the chemicals that are used in its products.

According to Greenpeace, Apple is the only company to have set a renewable energy goal for its supply chain, and several of its suppliers have already committed to using 100 percent renewable energy.

Apple is also committed to renewable energy at its own facilities and is ultimately aiming for a closed-loop supply chain. As for chemicals, Apple is one of two companies (along with Google) that have eliminated all brominated flame retardants and polyvinyl chloride.

Apple's overall Greenpeace "grade" was a B-, but broken down, the company received an A- for the aforementioned environmental efforts, a B for chemicals, and a C for resources, due in large part to the lack of repairability of its devices and its use of proprietary parts.

Apple continues to design products with proprietary parts to limit access and actively lobbies against right to repair legislation in New York and Nebraska.

It is reported that Apple and Sony have blocked attempts to strengthen environmental electronics standards that would encourage device designs that are easier to repair, upgrade, and disassemble for recycling.

Greenpeace has previously targeted Apple in a repairability campaign to combat planned obsolescence, accusing Apple's difficult-to-repair devices of shortening device lifespan and leading to more electronic waste. Apple is not likely to make changes to the way its devices are manufactured to make them easier for third-parties to repair, but its efforts towards a closed-loop supply chain could eventually result in far less waste.

Earlier this year, in Greenpeace's annual green report, Apple was ranked the most environmentally friendly technology company in the world. That report focused on factors like energy transparency, energy efficiency, renewable energy commitment, and advocacy.

LOL where are the As? Greenpeace should not exist.

You don't get an A grade just because everybody else is worse than you; what kind of a quantitative system is that?
[doublepost=1508214666][/doublepost]

Well hold on for a second. If Apple has a recycling method (Liam?) to break down the products so that they can reuse the materials, why would there be a "repairability" score? Isn't it better if users let Apple recycle their phones?

Example:
Let's say the iPhone is super repairable. I break my phone's screen. So then I pop off the screen, THROW AWAY THE SCREEN INTO THE TRASH, and pop a new one in (as well as trash all the packaging that came with the new screen).

I can dump the phone onto Apple and let them break it down. I'm sure they can figure out a use for my broken screen (melt down the glass maybe?) as well as all of the components.

Because repair and reuse are higher in the waste hierarchy ('https://en.wikipedia.org/wiki/Waste_hierarchy') than recycle.
Score: 25 Votes (Like | Disagree)

More like BS! Apple is basically number one, only topped by a socialist organization known as Fairphone (who has heard of them? how many phones do they sell?) and they only get a B-?!?

That's like saying Apple just cured cancer, they get a B- for innovation.

lol why so angry?
They do have an issue with resource consumption though.
Anyways, such a "low" score can help motivate companies like Apple to improve. And as history tell us, Apple does tend to answer these environmental group's harsh criticisms and addresses it.
Score: 16 Votes (Like | Disagree)

More like BS! Apple is basically number one, only topped by a socialist organization known as Fairphone (who has heard of them? how many phones do they sell?) and they only get a B-?!?

That's like saying Apple just cured cancer, they get a B- for innovation.

It is a Dutch company (hence that's why I've heard of them) that produces modular phones, that can be easily upgraded to prolong its life. Last I heard though, they ran android and a pretty old version at that. You're better off buying an iPhone if you care about the environment.
Score: 14 Votes (Like | Disagree)

Juan007
More like BS! Apple is basically number one, only topped by a socialist organization known as Fairphone (who has heard of them? how many phones do they sell?) and they only get a B-?!?

That's like saying Apple just cured cancer, they get a B- for innovation.
Score: 12 Votes (Like | Disagree)

citizenzen
B- looks pretty good amongst that group.
Score: 11 Votes (Like | Disagree)

btrach144
Everyone hated Greenpeace when they rated Apple poorly 10+ years ago. Then Apple made a commitment to making earth friendlier(ish) products and their rating went up. Now everyone on MR is treating them like a legitimate source.
Score: 11 Votes (Like | Disagree)
Read All Comments

Friday May 20, 2022 8:55 am PDT by Juli Clover
Apple is working on an updated version of the HomePod that could come in the fourth quarter of 2022 or the first quarter of 2023, according to Apple analyst Ming-Chi Kuo. Kuo says that there "may not be much innovation in hardware design" for the new HomePod, and there is no word on what size the device will be and if it will be a HomePod mini successor or a larger speaker. Apple would ...
Read Full Article • 198 comments