96 percent of the energy Apple uses comes from renewable sources like wind and solar, allowing the company to reduce its carbon footprint, and in 26 countries, Apple facilities are powered with 100 percent renewable energy. With much of its own company using renewable energy, Apple has started focusing on its suppliers to further its sustainability efforts. 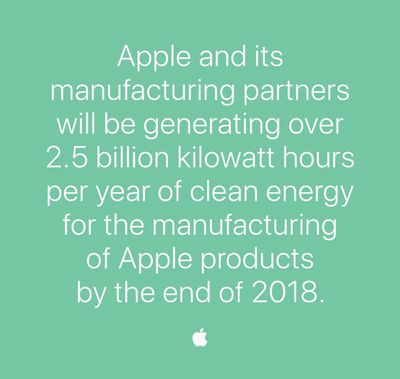 "We look at our carbon footprint as so much more than just our office, our data centers, our stores, even our distribution centers," Jackson told Bloomberg Television. "All that's included in our 96 percent, but now we're moving onto our supply chain."

Late last month, Apple promised to honor the commitment it made under the Obama administration to fight climate change, and today, Jackson said Apple plans to continue on its path and make its values known to the Trump administration, which has started to rescind environmental rules and protections.

"One thing this administration has made clear is that they want to hear from business and so we're going to do everything we can to make our values known," Jackson said.

Along with Compal Electronics, Sunwoda Electronic, and Biel Crystal Manufactory, four other suppliers have committed to using clean energy: Lens Technology, Solvay Specialty Polymers, Catcher Technology, and Ibiden. In March, Apple said that by the end of 2018, the company and its supplier partners expect to generate more than 2.5 billion kilowatt hours of clean energy per year.

I'm a pro-oil Texan and this is awesome. Good for Apple

Texas gets a bad environmental rap. There is more wind energy being generated in Texas per capita than anywhere else in the country. If you believe the stereotypes and politics, you'd think there'd be none. I have to admit to being very surprised when I found this out.

Companies should be flexible enough so that they don't consider themselves in the oil business, but rather in the energy business and be open to developing and marketing any kind of energy (the cleaner the better).

One of the reasons all the private commuter railroads went out of business in the U.S. is because the railroad companies considered themselves to be in the railroad business, not the transportation business. If they realized the latter, they would have built commuter lines to airports, etc. Similarly, the movie studios almost went out of business in the 1950's because they at first refused to produce for television. They thought they were in the movie business, not the entertainment business.
Score: 5 Votes (Like | Disagree)

I'm a pro-oil Texan and this is awesome. Good for Apple

Now I have the rich texan image from the simpsons stuck in my head. You should add that as your profile image :p
Score: 3 Votes (Like | Disagree)

macTW
Whether you like Apple or not, it does stand behinds it's values and is changing the world.
Score: 2 Votes (Like | Disagree)

Porco
Good on Apple for being amongst those leading where (most) politicians fear to tread (and I certainly don't just mean in the US).

Apple's attitude on this subject (as well as others that people constantly criticise for them expressing an opinion on) is part of why I still want them to do well, and why I'm still minded to spend more money on their products than rival companies, all else being equal.

Lisa Jackson certainly seems to be doing a great job, so kudos to her too.
Score: 1 Votes (Like | Disagree)

modemthug
I'm a pro-oil Texan and this is awesome. Good for Apple
Score: 1 Votes (Like | Disagree)

Wednesday June 29, 2022 5:23 pm PDT by Sami Fathi
The redesigned MacBook Air with the all-new M2 Apple silicon chip will be available for customers starting Friday, July 15, MacRumors has learned from a retail source. The new MacBook Air was announced and previewed during WWDC earlier this month, with Apple stating availability will begin in July. The MacBook Air features a redesigned body that is thinner and lighter than the previous...
Read Full Article • 319 comments