A new campaign by Greenpeace today has rated the repairability of six Apple devices against the smartphone, tablet, and laptop market at large, the purpose of which is to highlight planned obsolescence in the technology industry. Greenpeace partnered with iFixit to assess over forty different devices that debuted between 2015 and 2017, with iFixit's teardown repairability scores serving as the basis for the data. 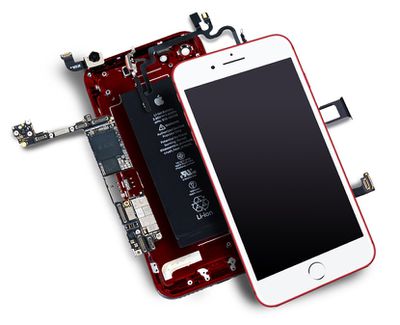 Scoring worst on the list were the two MacBooks, which each got a 1/10, and the two iPads didn't fare much better, both getting 2/10 marks in the campaign. The new iPhone 7 models were much higher, both receiving a 7/10 with positive check marks in display replaceability but red x's in all other categories.

Microsoft had trouble in the ratings as well, with its Surface Pro 5 and Surface Book both rated at 1/10. Conversely, the brands abiding by Greenpeace's repairability mantra included Fairphone, Dell, and HP, which all had products rated at 10/10 on the campaign's scale.

Ultimately, Greenpeace wants to bring awareness to the phenomenon of planned obsolescence, which the company's IT sector analyst, Gary Cook, said "adds to growing stockpiles of e-waste," due to difficult repairability shortening device lifespan. Cook noted that, "improving the repairability of electronic products is technically achievable and brands should be prioritizing this in their product design."

“Electronics take a massive amount of energy, human effort, and natural resources to make,” said iFixit CEO Kyle Wiens. “And yet, manufacturers produce billions more of them every year—while consumers keep them for just a few years before tossing them away. E-waste is one of the fastest growing waste streams in the world. We should be able to make electronics a more sustainable part of our lives.”

In an environmental report earlier this year, Greenpeace awarded Apple with an "A" rating, calling it the most environmentally friendly technology company in the world, for the third year in a row. That report looked specifically at energy transparency, renewable energy commitment, energy efficiency and mitigation, renewable procurement, and advocacy.

krazzix
Planned obsolescence has nothing to do with repairability.

Mascots
Since when does lack of repairability mean planned obsolescence?
Score: 30 Votes (Like | Disagree)

Cesar Battistini
But Apple showed plans to recycle every once of e-waste they generate, how about the other companies?
Score: 28 Votes (Like | Disagree)

gaximus
Whats the purpose of this, its not going to change how Apple or Microsoft builds their products, it'll just show other manufactures that its ok to produce them this way. It also doesn't help me as a consumer, I'm still going to buy what I want, and if I was the type of consumer that repairability was a deciding factor, then I would be the type of consumer to do my own research into the device.

And as far as recyclability goes, Apple has a whole system for recycling their products and is one of the best for environment.
Score: 23 Votes (Like | Disagree)

Zarniwoop
And no word about the software. Every obsolete iToy has been crippled with an software update, and therefore became pain to use. I was a happy iPad 3 user with 7.1 version, but after 8.xx and especially 9.xx it became so slow that it wasn't pleasant to use anymore. And if you didn't backup your device with the older iOS, there's no way back. That is planned obsolescence.
Score: 21 Votes (Like | Disagree)

Since when does lack of repairability mean planned obsolescence?

I mean they definitely have a direct link. I have much older macs that I've upgraded ram and storage to SSD, and they run great still.

Imagine if you could buy a laptop, and then 2 years later add more ram or just easily swap out a harddrive! Ground breaking I know, but that takes a lot of courage.

I'm not going to rail on Apple and expect everything to be easily replaced, but ram, harddrives, and batteries should be easy to swap out or upgrade at a minimum.
Score: 13 Votes (Like | Disagree)
Read All Comments