While the iMac Pro doesn't launch for another six weeks or so, possible benchmarks for the computer may have already surfaced on Geekbench. The results provide us with an early look at just how powerful Apple's $4,999-and-up desktop workstation will be when it is released in December. 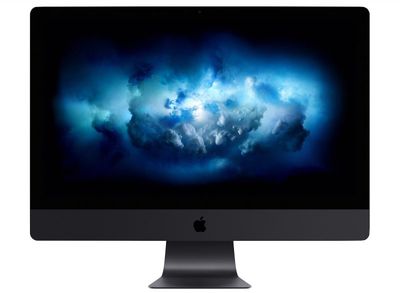 All of the models are identified as "AAPJ1371,1," and unlike other Xeon chips, the processors have a "B" suffix. A few of the benchmark results are from late August, while the rest are from October.

MacRumors spoke with Geekbench founder John Poole, who speculated that the iMac Pro may require chips with lower thermal design power, and thus lower frequencies, due to its all-in-one form factor. He noted that the other chips in the Xeon Processor W family have relatively high TDPs of up to 140W.

The multi-core Geekbench score for the 8-core model averages out to 23,536, which is the highest performance of any iMac ever. It's nearly 22 percent faster than the latest 5K iMac equipped with a maxed-out 4.2GHz quad-core Core i7 processor, which has an average multi-core score of 19,336.

The higher-end 10-core iMac Pro has a multi-core score of 35,917, which is roughly 41 percent faster than the latest Mac Pro maxed out with a 2.7GHz 12-core Xeon E5 processor. Even its single-core score of 5,345 is faster than all but the highest-end 5K iMac released earlier this year.

All in all, the benchmarks point to the iMac Pro being unsurprisingly powerful from top to bottom. And that's not even looking at the 18-core iMac Pro, which hasn't been benchmarked yet and will surely blow every other Mac out of the water—at least until the modular Mac Pro is ready.

Apple said the iMac Pro will also feature top-of-the-line Radeon Pro Vega graphics, up to 4TB of SSD storage, and up to 128GB of ECC RAM. The computer will share the same design as the standard iMac, but with an all-flash architecture, a new thermal design, and four Thunderbolt 3 ports.

Not everything that costs money is overpriced. After all, when companies cut corners and skimp on things like quality control and outsource cheap alternatives for components and support, people seem to magically realize that a better experience comes with a higher price.
Score: 31 Votes (Like | Disagree)

fairuz
It's a sick (the good kind) computer but also kinda stupid at the same time. Having to downclock your high-end CPUs due to thermal limitations... What a shame. This thing should just be a separate box that can keep itself cool.
Score: 19 Votes (Like | Disagree)

And before you say "but professionals can't rely on a Hackintosh": Yes, you're probably right - because content creators are not tinkerers - BUT! - that doesn't change the fact that this machine is a bad value!
Score: 17 Votes (Like | Disagree)

I so wish there was a downvote button for this.

This is for professional applications, where reliability is paramount, and people don't have time to be messing about with your super overclocked hack box. And I know you'll come back and say yours is completely reliable, has never gone wrong etc. and that a baby could make it work, but it's simply not true.

What you have is a hobby machine for geeks who like to tinker (and I don't have a problem with that, I've been temped to build one myself and I used to run OS X on an MSI Wind back in the day). This is for people with jobs in content creation.
Score: 16 Votes (Like | Disagree)

MH01
Imagine what it could have been had it not been for the unnecessary thin iMac chassis .

They really should have made a new bigger chassis for the iMac pro
Score: 15 Votes (Like | Disagree)

KeepCalmPeople
So another Apple product that is thermally limited due to the prioritization of design aesthetic over function? For that kind of money, it should have it's own special chassis, and possibly a bigger/thicker shell, to allow it to run at full speed.
Score: 14 Votes (Like | Disagree)
Read All Comments