iOS Gained Market Share in Most Countries This Summer, Although Samsung Drove Gains for Android in UK

Apple's portion of the mobile ecosystem market increased in eight major territories in the three months ending August 2017, according to new data collected and shared by Kantar Worldpanel. Over the summer of 2017, iOS saw growth in the following territories compared to the same year-ago period: Spain (4.4 percentage point increase), followed by China (4.3), the United States (3.7), Germany (2.3), France (1.7), the European Union (1.2), Australia (0.9), and Italy (0.4).

Specifically, iOS grew from 31.3 to 35 percentage points year-over-year in the U.S., and although Android still dominates the U.S. smartphone OS market at 63.2 percentage points, it has dipped slightly from its hold of 66.1 percentage points in the same year-ago period. Dominic Sunnebo, Kantar Worldpanel ComTech's Global Business Unit Director, said that "Apple maintained strong momentum in the US one month before the release of iPhone 8 and iPhone 8 Plus," so iOS should continue to see positive growth in future data that measures the holiday months. 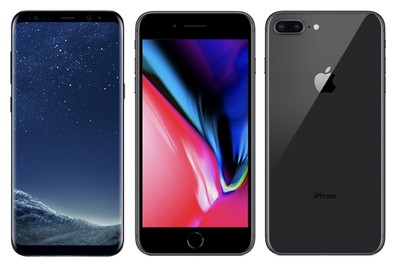 Galaxy S8 compared with iPhone 8
However, Apple's iOS decreased slightly in the United Kingdom/Great Britain in the summer months this year. The drop in iOS market share is said to be due to Samsung's "significant" promotional activity for its Galaxy S8 and J3 smartphones eating into Apple's pre-iPhone 8 sales. In total, Apple devices running iOS accounted for 33.9 percentage points during this summer period in the UK, dropping 2 percentage points from 35.9 one year prior.

Although this was "offset slightly" by strong sales of the iPhone SE, Samsung itself saw a 6.4 percentage point increase in the June-August 2017 period in the UK. Overall, Android OS grew from 58.9 in 2016 to capture 65.3 percentage points in the three month period. Of course, once Apple's sales of new iPhones are accounted for in future data by Kantar Worldpanel, iOS should see a resurgence.

A few Galaxy S8 owners mentioned both promotional materials put out by Samsung and a "good deal" on the device as key factors to their purchases. At the time of its launch, Samsung said the S8 marked its "best ever" pre-order period for a smartphone.

“Samsung took full advantage of the weeks just before the iPhone 8 and iPhone X were released in Great Britain, with significant promotional activity that helped drive its overall share to a three-year high of 38.4% for the three months ending August 2017,” explained Dominic Sunnebo, Global Business Unit Director at Kantar Worldpanel ComTech. “More than one in four Galaxy S8 buyers cited a specific promotion as a key purchase influencer, and almost half said that a good deal on the price of the phone was key to their purchase. Both of these metrics experienced a large increase over the last two months of the period.”

Otherwise, the only other regression centered in Japan and accounted for just 0.1 percentage points lost by iOS between 2016 and 2017.

Global smartphone OS shares data via Kantar Worldpanel
iOS market share is expected to see another boost thanks to the launch of the iPhone X, which has caused many people to put off ordering the iPhone 8 and iPhone 8 Plus in anticipation of Apple's greatly redesigned smartphone. Pre-orders for the device go up two weeks from today on October 27, while the official launch date will come three weeks from today on November 3.

Apple is ripping off UK customers and people are beginning to realise. You can tell me all you like about Apple betting on the pound being lower in the future because of Brexit, but right now it’s £1=$1.30.

Also, I can buy an S8 for around £600. The equivalent iPhone will be £1000. For £400, I can learn to live with Android, because there isn’t a massive difference now between the two OSs for most people.

Oh and also Apple has the audacity to charge £800 for a design that came out four years ago. No thanks, Tim.
Score: 36 Votes (Like | Disagree)

Apple is ripping off UK customers and people are beginning to realise. You can tell me all you like about Apple betting on the pound being lower in the future because of Brexit, but right now it’s £1=$1.30.

Also, I can buy an S8 for around £600. The equivalent iPhone will be £1000. For £400, I can learn to live with Android, because there isn’t a massive difference now between the two OSs for most people.

Oh and also Apple has the audacity to charge £800 for a design that came out four years ago. No thanks, Tim.

And before people leap in and say, yes, but prices in US are sans tax… even with VAT and taxes in account the Apple "exchange rate" is piss poor value.
Score: 23 Votes (Like | Disagree)

And before people leap in and say, yes, but prices in US are sans tax… even with VAT and taxes in account the Apple "exchange rate" is piss poor value.

Funny thing is mostly everything else since Brexit has been the same, car pricing, clothes, food, games consoles, everything apart from Apple pricing.
Score: 18 Votes (Like | Disagree)

BoneCollector
After owning numerous android phones, my opinion is the iPhone is still the best smartphone around. The best software and best hardware longevity are hard to beat.
Score: 16 Votes (Like | Disagree)

And before people leap in and say, yes, but prices in US are sans tax… even with VAT and taxes in account the Apple "exchange rate" is piss poor value.

This! The game is up Apple .. your products are no longer best of breed so those with half a brain are leaving you in droves - nothing to do with marketing, your price hikes have just drawn attention to the flaws and made otherwise loyal customers (like me) think about alternatives which is dangerous.

The 8 is a dinosaur compared to the S8 and people aren't convinced by the X beyond the silly gimmicks and people who must have an apple logo on something they own.

My movements over recent months/years:

iPad remains but frankly if I can get over the size of the Note8 that'll be next purchase and the iPad will be on the way out too.

The cost of entry, while painful, is worth it _if_ it's the best end to end experience - but it's not (for me at least) any more.

If Google can address App quality somehow .. the Android counterparts are still more buggy than iOS, and I'm talking about BIG apps like Spotify, Plex etc.. then they could do some serious damage
Score: 8 Votes (Like | Disagree)

calzon65
Competition is good to keep Apple and any other company on their toes. I use the iPhone, but I'm glad there is a solid competitor to IOS.
Score: 7 Votes (Like | Disagree)
Read All Comments