Bloomberg has partnered with iFixit to provide a high-resolution look at how the inside of the iPhone has changed since first launching a decade ago. 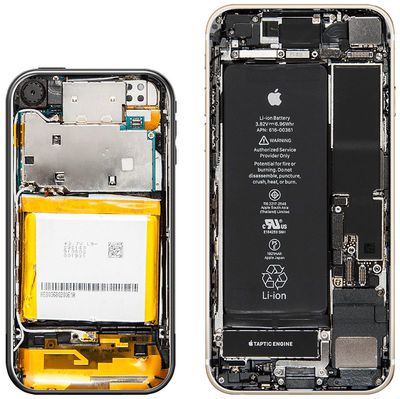 The original iPhone on left vs. brand new iPhone 8 via Bloomberg
The original iPhone, above left, is equipped with a bulky, yellow lithium-ion battery rated for 1,400 mAh. Apple said that was good enough for up to eight hours of talk time, six hours of web browsing, seven hours of video playback, or 24 hours of audio playback, but real-world results certainly varied.

In the top-left corner sits a 2-megapixel rear camera that lacks an LED flash and shoots photos that are unequivocally blurry by today's standards.

While shielding covers many of the other components, the original iPhone is equipped with 4GB, 8GB, or 16GB of storage, a single-core ARM11 processor downclocked to 412 MHz, just 128MB of RAM, and a PowerVR MBX Lite graphics processor. It also has Bluetooth 2.0 and 802.11b/g Wi-Fi chips.

The original iPhone supports EDGE cellular networks, often referred to as 2G. The technology is so outdated that AT&T, which was the exclusive carrier of the device in the United States, doesn't even operate a compatible network anymore.

Other hardware in the original iPhone includes a 3.5-inch display with a resolution of 320×480 pixels, a mechanical Home button, and a deeply recessed 3.5mm headphone jack that was hard to use. The device's iPod-like 30-pin dock connector was succeeded by the Lightning connector in 2012.

The inside of an iPhone has looked similar since the iPhone 4, while the iPhone 3G and iPhone 3GS below look noticeably different.

iPhone 3G on left vs. iPhone 3GS on right via Bloomberg
While we've already seen the inside of every iPhone model thanks to iFixit's teardowns over the years, Bloomberg's full feature article provides high-resolution photos and is worth a look for iPhone aficionados.
[ 115 comments ]

8 hours versus 14 hours of talk time and you say it hasn't changed? Batteries are completely dependant on chemistry, which simply doesn't evolve as fast as our ability to manufacture and package smaller electrical components. A new iPhone is literally 1000x as fast as the 10-year old original and you complain about "decades old" tech. Well, I have worse news for you. The screen is still made of glass, which is "millennia old" tech, so... enjoy your stone-age glass rectangle :D
Score: 27 Votes (Like | Disagree)

Battery life actually improves. The thing is though over the years we’ve gotten faster processors, faster graphics, much higher resolution displays, much brighter displays, a chunk of the space being taken up for better cameras and things like haptic feedback etc. It all sucks the actual improvement of battery life away so we get more or less the same with slight improvements due to power management etc.
Score: 20 Votes (Like | Disagree)

Just imagine, needing an adapter to use a normal pair of 3.5mm jack headphones on an iPhone... ! :rolleyes:;)

Just imagine, how the Airpods don't use any wires and seamlessly pair with the iPhone without the use of an adapter.
Score: 18 Votes (Like | Disagree)

And the point I'm making is people need to stop thinking that Apple invented, designed, developed, and fabricated the LCD display, CPU, camera, touch screen, GPS, etc. Brilliant engineers all over the world did that. That is *real* engineering. Steve Jobs yelling at a developer or bullying suppliers into exclusive, cheap cost deals, hoarding DRAM and locking out other buyers, and hiring slave labor in China is more of what Apple is about. It's capitalism. It's business.

This romanticization of Apple as the do-gooder, the benevolent creator of your coveted devices is getting out of hand.

So start a ****ing thread instead of projecting your topic onto another post that had nothing to do with it.

BTW, while there are plenty of off the shelf components in iPhones, Apple DOES invent quite a few of their own tech and then WORKS WITH THEIR MANUFACTURERS down to the fabrication level (in several cases actually inventing new processes and then EQUIPPING their manufacturers with that process).

Your pushback on that is astounding given the W1 & W2, the timer coalescing chip they made for the iMac 5k (truly an apple invention to solve a problem the standards didn't have an answer for) and new iPads, their completely in house designed GPU, the custom designed Image Signal Processor they've integrated into their A-Series chips, their pioneering of an HTTP streaming protocol that they designed and pushed for inclusion at the standards bodies, etc.

It seems in your effort to get more people to realize that Apple doesn't invent it all, you've completely discounted that in very specific areas they've done exactly that. You went to the far deep end when the reality is a mix of both off the shelf components AND completely in-house designs/processes.
Score: 14 Votes (Like | Disagree)

NightFox
Coming next - how much the Mac Mini has changed from 10 years ago to today's models...
Score: 11 Votes (Like | Disagree)
Read All Comments

Sunday May 15, 2022 6:14 am PDT by Sami Fathi
iOS 16 will include new ways of interacting with the system and some "fresh Apple apps," Bloomberg's Mark Gurman has said, offering some more detail on what Apple has in store for the upcoming release of iOS and iPadOS set to be announced in a few weeks at WWDC. In the latest edition of his Power On newsletter, Gurman wrote that while iOS 16 is not likely to introduce a major face-lift to...
Read Full Article • 197 comments