Apple Watch Nike+ GPS and LTE Series 3 models are now available to buy in stores across Australia, Asia and Europe, with customers already posting shots of their newly acquired smartwatches on the MacRumors forums and over on Reddit. 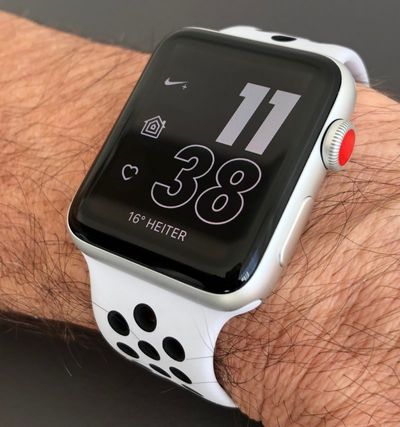 Several posts confirm that in some cases, customers are cancelling their online orders held up in shipping and are walking into local brick-and-mortar stores to buy their chosen Nike+ Series 3 model outright.

MacRumors forum member griffith_500 posted the above photo explaining that he preordered the Nike+ LTE with a reseller only to be informed today that they wouldn't receive the watch before mid October. "So I tried my luck and walked into the Apple store in Zurich where they had all the Nike models on stock... Love it!"

Meanwhile across the U.S., Apple orders are currently in transit across various locations and should be making their way into the hands of customers in the next few hours. Although some eager early risers have also cancelled their online orders with Apple after stores including Best Buy updated their stock to indicate availability for in-store pickup as soon as stores open today.

LTE Space Gray aluminum case with Black/Pure Platinum Sport Loop (Image via Reddit)
Several Nike+ watch bands are also available for in-store pickup today. Additional Nike+ bands are $49 each in the United States. Apple Watch Nike+ comes in four styles in both 38mm and 42mm sizes, with both cellular and Wi-Fi + GPS only models to choose from:

Don't worry soon they will have so many that Apple can't give them away....

Don't worry soon they will have so many that Apple can't give them away....

GrumpyMom
Mine is arriving today! White Nike with red dot. I love the red dot!
Score: 5 Votes (Like | Disagree)

Look further down the page.

Again, the Nike Sport loop, is not available. Only Nike Sport band.
Score: 3 Votes (Like | Disagree)

Personally, I prefer the space grey over the silver in the aluminum case. Was not a fan of the silver from the beginning. Just my opinion...nothing more. However, when combined with certain Nike bands, the silver looks really nice.
Also, I don't understand why you can't get the Nike faces unless you buy the Nike branded watch. You can add the Nike bands to any version of the watch, but don't get the Nike face when there is no other difference other than the logo on the back, which can't be seen. The Nike watch is priced the same, too. So what's the big deal.
Just like if you decide to add a Hermes band, you should be able to get the face (which I really like) somehow. Again, no difference otherwise. You pay extra for the band either way. Oh, well...:confused:

Same way I feel. I wish I could get those Nike faces on my watch. I rather have them than Micky and the Toy Story gang:rolleyes:
I understand Apple might not want every joe blow designing knock of Rolex faces but they could license a few different companies to design faces and sell them for a $1 or $2 in a watch face store.
Score: 2 Votes (Like | Disagree)
Read All Comments