Racing title F1 2017, the official game of the 2017 Formula One World Championship, is available for purchase and download from the Mac App Store starting today.

Published by Feral Interactive, F1 2017 was released for Mac in August, but has previously only been available from the Feral Store and Steam, with the Mac App Store taking longer to release. 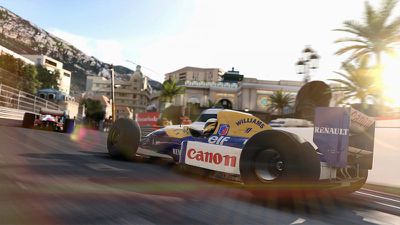 Players can choose from several unique Championship races to play, including the official 2017 FIA Formula One World Championship, the Classic All-Weather Championship, and the super-accessible, race-only Sprint Championship.

The game is the ninth F1 in the series, and this new version brings an expanded team management mode, giving players additional control over the research and development of new car parts.

Win the 2017 World Championship and race some of the fastest and most iconic F1TM cars of the last 30 years.

F1 2017 grants unprecedented access to not only the on-track excitement of F1, but also the off-track dealings and vehicle development that goes along with it. The ten-year Career Mode includes practice programmes to help hone your skills, an expansive Research and Development tree to provide greater control over the development of your car, and the ability to manage engines and gearboxes over the course of the season.

The seasons almost over. What's the point? Lol

Er, the point is that it's a game (and a very good one, if you're into F1). Playing the game does not in any way affect the outcome of the real season ;)

Seriously, this is the earliest into the season we've ever had the official F1 game on Macs -- this year the Steam version for Mac released the same day as the Windows version, for the first time ever. If you want to support Feral and their long Mac gaming history and future efforts, you could do worse than buy this in recognition of that.

Codemasters can't really release the Windows version (which Feral ports for Mac) an awful lot earlier than they do, as they have to model the cars based on what arrives at Australia in March, and the relative performances of those cars based on the first few races. The earliest they've ever released is July, and that was the most stripped-down and disappointing game in the series to date.
Score: 3 Votes (Like | Disagree)

macs4nw
The real thing. Shucks... not supported on anything I own :(
Score: 2 Votes (Like | Disagree)

You can play with an eGPU, just put an RX580 in it and have fun!

I mean, it's nice that games get Mac support but they're total garbage compared to their Windows versions. I'm not sure if that highlights the difficulty of porting or just how bad Metal is relative to DirectX.
Score: 2 Votes (Like | Disagree)

Hmmm. The PC version is down to like half the price.

theheadguy
Supported on no Mac Minis since ever, no matter the cost or BTO specs... lol
Score: 1 Votes (Like | Disagree)

Supported on no Mac Minis since ever, no matter the cost or BTO specs... lol

You can play with an eGPU, just put an RX580 in it and have fun!
Score: 1 Votes (Like | Disagree)
Read All Comments