Eight Apple executives this week received 125,494 shares of stock each after restricted stock units or RSUs first awarded in 2014 vested. Apple issues RSUs, which vest after a set amount of time so long as an employee stays with the company, to its executives as bonus compensation. 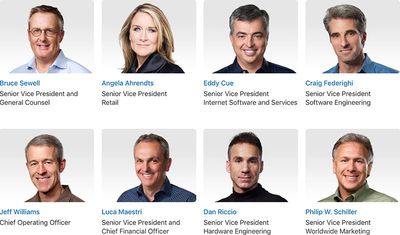 That placed Apple in the 80th percentile, so 125,494 RSUs vested. Had Apple's ranking been in the 85th percentile, the executives would have seen a larger reward as 200 percent of the target 68,576 RSUs would have vested.

Over 62,000 shares were withheld by Apple from each distribution to satisfy the tax withholding requirements of vesting RSUs.

Aluminum213
And they increased the price of the iPad Pro and every other product imaginable. God bless capitalism
Score: 8 Votes (Like | Disagree)

69650
Apple should reward the people below them that do all the hard work. I’ve not seen anything to warrant these VP payments.
Score: 8 Votes (Like | Disagree)

What have you created lately?

macTW
And still people seem to not understand the value these men and women bring to the company as well as the other drivers to price increases.
Score: 4 Votes (Like | Disagree)

Soccertess
bahahah.. Angela Ahrendts.. Someone, please tell me what she has done to make Apple more profitable? She is the biggest waste of space. Take those millions and give out some free dongles!

Apple is suffering, god do their products suck. Come on.. Wireless charging - Qi (5 year old standard that sucks)? Dongles? Siri (OMG, if people could use google now siri would have a 1% adoption rate) While i was impressed with Airpods, macbooks really are quite sad these days.

Tim and Angela need to go, Eddy cue needs to go too for not doing anything with Siri all these years. Can't believe these tards get so much for making half ass products. And Riccio should be put on notice for how much macbooks sucks (even their dongle are weak and suck these days!)
Score: 4 Votes (Like | Disagree)
Read All Comments