iPhone X with 256GB storage is the most popular device among prospective smartphone buyers, according to a survey conducted by RBC Capital Markets. 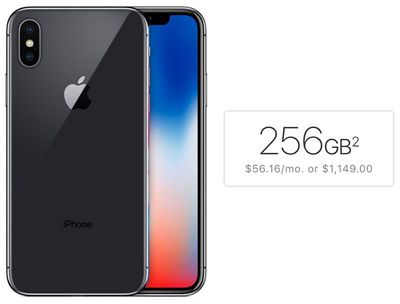 Of the 832 individuals surveyed, 28 percent said they plan to purchase iPhone X as their next smartphone. An additional 20 percent of respondents said they intend to buy iPhone 8 Plus, while 17 percent will go for iPhone 8.

The remaining 35 percent of consumers plan to purchase an older model, ranging from iPhone 6s to iPhone 7 Plus.

RBC Capital Markets said 43 percent of prospective buyers interested solely in a new iPhone are looking to purchase an iPhone X, while 32 percent favor iPhone 8 Plus, but no accompanying chart was provided for this data.

A majority 57 percent of respondents who plan on purchasing iPhone X will opt for the 256GB model, which costs $1,149 in the United States. 43 percent said they will buy the 64GB model for $999.

By comparison, 50 percent of iPhone 7 respondents last year opted for 128GB, which was the middle tier between 32GB and 256GB.

Interestingly, Apple has removed the middle-tier storage option from iPhones. We think that given increasingly greater storage requirements, most of mid-tier storage users will move towards the higher tier.

46 percent of a larger pool of 4,196 respondents said wireless charging is iPhone X's most attractive feature.

infinitejest
Of course...why does the 64GB model even exist on a phone that costs 1K?
Score: 58 Votes (Like | Disagree)

anthonymoody
Have to admit I'm surprised about the breakdown for most appealing feature. Wireless charging to me is sort of meh since you still have to put the phone in a particular/specific spot, which itself is wired to an outlet. Happy to take it, I guess, but not something that's especially bothered me as "a problem" with the phones I've owned for the last 10 years.

To me it's the very large screen is a relatively compact body that's most appealing.
Score: 39 Votes (Like | Disagree)

Of course...why does the 64GB model even exist on a phone that costs 1K?

You would think that the lowest would be 128 for this price point.
Score: 35 Votes (Like | Disagree)

kdarling
So much for those who dissed the attraction of wireless charging.
Score: 18 Votes (Like | Disagree)
Read All Comments