Apple today released the first public beta of iOS 11.1 to its public beta testing group, just a day after seeding the beta to developers and a little over a week after releasing the iOS 11 update to the public.

Beta testers who have signed up for Apple's beta testing program will receive the iOS 11 beta update over-the-air after installing the proper certificate on an iOS device. 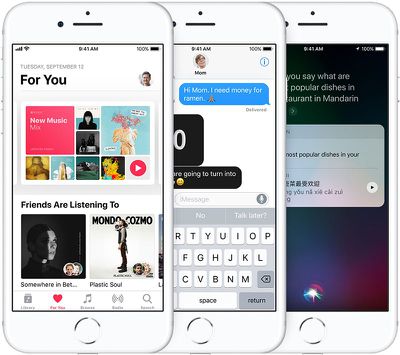 While Apple has promised that some major features like peer-to-peer Apple Pay payments and iCloud support for Messages are coming in beta updates, those features are not present in the iOS 11.1 beta.

iOS 11.1 seems to feature only small changes like a tweak to add multiple emoji suggestions to the predictive text options on the built-in keyboard. There's also an updated camera icon under Restrictions, a new animation when tapping the status bar to scroll upwards, and a faster unlock animation.

iOS 11 is a major update to the iOS operating system, introducing significant design changes, a revamped Lock screen experience, a new Control Center, ARKit for developers, new app features, a new App Store, and an entirely reimagined interface for the iPad that includes a Dock, Drag and Drop support, and a new App Switcher for better than ever multitasking.

now i see it
Glad to see they got that emoji bug ironed out.
Score: 7 Votes (Like | Disagree)

Some random bugs, fixed some previous ones though. One of the really nasty ones on Ipad's.. landscape mode within an app, turn back to portrait.. crash.. So that's not a fun one. Sometimes it won't crash right away, just lock up for 30 seconds then work. That's a combo of IOS bug and application, obviously depending on the app. On the phones.. haven't noticed any huge bugs, just more minor ones. You won't notice much of a change compared to 11.0 really.
Score: 6 Votes (Like | Disagree)

As for speed issues, its already been documented by Ars Technica that a 5s is slower under iOS 11 and lots of anecdotal experiences have been described by users as well. Unfortunately, every iOS release is slower than the last.

It may be frustrating, but I don’t think it’s unexpected. The 5S is a 4 year old device with an A7 & 1GB.The latest HW platform is an A11 with 2 or 3GB. Between the A7 and A11 the performance gains are relatively large, huge wrt graphics. Similarly, the iPhone 6 (A8/1GB) is relatively underpowered to run iOS 11.

But beginning with the 6S/iPhone SE/$329 iPad, the A9/2GB platform reaches that “fast enough” point, where the differences from the newest HW aren’t so large. (But who’s to know whether the 6S running iOS 13 will be any less painful than is a 5S trying to run iOS 11? However, with the 6S HW being so similar to the 7, I like the odds.)

There is reason for optimism, though, that the 5S’s performance under iOS 11 will improve. Historically, older devices are slowest with the initial releases of the latest OS. After the dust settles and OS bugs are fixed—and maybe more importantly, ill-behaved apps are updated—the situation will improve. Apple will optimize iOS performance for older models, and to a lesser extent, third party developers will tweak their apps as well.

This goes against the “forced upgrade” narrative some like to push, but it’s proven to be true. Sometimes I wish Apple were more aggressive in cutting off newer OS support for older devices. But I guess they figure more people would rather have access to the latest OS, even if their device runs slower, than be stuck on the old OS. (Which would cause an even louder outcry from pushers of the “forced obsolescence” canard.)
Score: 4 Votes (Like | Disagree)

Was ios11 supposed to offer a performance boost? If not, given how ios8 was the original for Iph6, I hear folks say that you should update no more than one major version of iOS, perhaps 2, in order to prevent... well, such performance hits.
Score: 4 Votes (Like | Disagree)
Read All Comments