iFixit purchased one of Apple's new iPhone 8 models in Australia, and has already started ripping it apart in one of the site's traditional teardowns.

Inside, the iPhone 8 looks a lot like the iPhone 7, but there are some notable differences, like the wireless charging coil that enables Qi-based inductive charging. 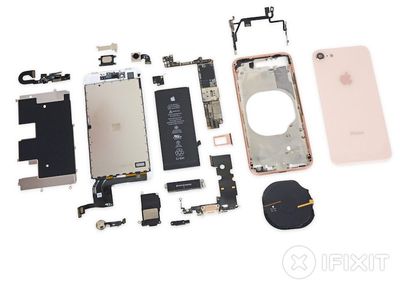 The iPhone 8 features an 1,821mAh battery, smaller than the 1,960mAh battery in the iPhone 7. Despite the change, the iPhone 8 continues to offer the same battery life as the iPhone 7 due to processor improvements. Battery capacity was first unveiled last week, but has now been confirmed.

Included on the logic board is the A11 Bionic chip, which is layered over 2GB of SK Hynix LPDDR4 RAM. There's also a Qualcomm MDM9656 Snapdragon X16 LTE modem and an NXP 80V18 Secure NFC module, among other chips.

Other small tweaks and changes in iPhone 8 include a new Lightning port bracket that seems to reinforce it, a new interconnect/antenna cable over the speaker that iFixit calls "strange," a lack of gaskets on the pentalobe tabs used for the display, no tri-point screws holding down the display cable bracket, and additional adhesive strips holding the battery in place.

iPhone 8 and iPhone 8 Plus launched today at Apple retail stores in the United States and other first wave launch countries, coinciding with the first deliveries to customers.

Who the hell came out with the name “bionic”? It sounds retarded :)

I know, it's embarrassing.

I did wonder if this is a UK vs USA type of thing, or it is "Just Apple"

These are the type of names given my people still at school to try and impress your mates in the playground.
Not for multi billion serious company.

Going to see the "Apple Genius" is really cringeworthy. But perhaps that's as I'm from the UK ?
Score: 6 Votes (Like | Disagree)

To reconcile that discussion: more RAM doesn't mean better, but 6Gb pales 2Gb.
Arrggh, makes you wonder what lunatic at Apple decides to couple a top notch CPU with avge RAM config/specs (LPDDR4 instead of LPDDR4X)

maflynn
[MOD NOTE]
A number of posts were removed as the thread was getting derailed by iPhone vs. Samsung. This is not the place for such discussions and so those posts were deleted.
Score: 6 Votes (Like | Disagree)

recoil80
As usual smaller battery size compared to previous year's model.
So instead of increasing battery life thanks to the new SoC they keep the same life reducing the size.
When Qi mats will be everywhere I'll stop caring about battery life, but it is a long way to go. For now, I guess the only way to improve battery life is buying the plus.
Score: 4 Votes (Like | Disagree)

Yeah! It probably is extremely power efficient when the screen is off.

This was my upgrade year and here I have the same bs of pipeline friendly Apple! Smaller battery again, really? It will quickly evaporate on LTE literally in minutes. Open up camera app and shoot a 10 minute video, 10-15 percent gone. Half an hour long voip video chat, 40 percent! I've seen this movie before. No UI disaster X, no 6sss! I'll change the battery and carry on with my life. Not a single penny for Apple this season.
Score: 4 Votes (Like | Disagree)
Read All Comments