iPhone 8 and iPhone 8 Plus reviews are out, providing us with a closer look at two of Apple's latest smartphones ahead of their Friday launch. 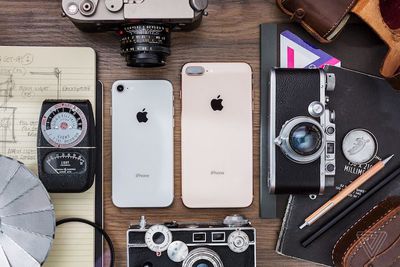 iPhone 8 and iPhone 8 Plus via The Verge
The devices represent Apple's first glass-backed iPhones since the iPhone 4s in 2011. Most reviews complimented the glossier design, although there were naturally some concerns about glass being more prone to shattering.

And not everyone was sold on the new look.

The glass might remind you of the iPhone 4, one of the most iconic Apple designs. But I’m not sold. The iPhone 7's glossy black finish gives it a contiguous surface, like a pebble smoothed by the ocean. The iPhone 8 shows seams where the glass touches the aluminum band, making it feel a little like a knockoff. And there's no denying it looks dated compared with the curved glass on rival Samsung’s Galaxy S8, which takes the screen all the way to the edge.

Apple stressed that the glass on iPhone 8 and iPhone 8 Plus has a strengthening layer that is 50 percent deeper, but we'll have to wait for drop tests to see how the devices hold up from both ordinary and extreme heights.


The switch away from aluminum was necessary to facilitate wireless charging, an overdue feature many Android smartphones have had for years.

Wireless charging makes the iPhone feel less like a Tamagotchi needing constant feeding, and more like a digital sidekick that’s always ready to go. Pick it up when you need it, put it down when you don’t; whenever you’re not using your phone, it’s charging. Android users have known this feeling for years, but a lot of iPhone users are going to love it now.

TechCrunch editor-in-chief Matthew Panzarino focused on the new cameras, which he said are "killer" and the best reason to upgrade this year yet again. He was particularly impressed with Apple's new Portrait Lighting effects, which he described as the marquee feature of the iPhone 8 Plus.

The studio and contour options are going to be flooding social networks and phones internet-wide as soon as people get their hands on their iPhone 8 Pluses. The stage lighting takes a bit more effort, but when you nail it and the software is able to do its job by accurately detecting hair and head shapes, it really stuns. It can produce images that feel professional and would take dozens of lights and pieces of equipment to pull off.

One of the new Portrait Lighting effects is called Stage Light, which spotlights the subject's face against a deep black background. But, as seen below, the results aren't always perfect.

Original photo on left with Stage Light on right via TechCrunch
CNET photographer James Martin tested the iPhone 8 Plus camera by shooting more than 2,000 photos in San Francisco, and he was thoroughly impressed with everything from detailed textures to low-light performance.

With the new sensor, HDR delivered better details in highlights and shadows. HDR is always on, signaling Apple's deeper commitment to computational photography with the iPhone 8 Plus. That's different than the iPhone 7 Plus, which gave you the option to set HDR to auto, off or on.

Martin added that even his high-end DSLR can't achieve the kind of exposure he achieved with the iPhone 8 Plus.

Shot on iPhone 8 Plus via James Martin/CNET
In terms of performance, The Verge's Nilay Patel said the A11 Bionic chip's increased processing power "feels like headroom for the future," and not something you immediately notice compared to the iPhone 7 in particular.

I didn't notice a huge performance boost over the iPhone 7 while doing basic things like browsing the web, watching videos, and taking photos. I played a few games and everything seemed fast and fluid, of course. Apple sells iPhones for years after they're released — the iPhone 6S is still in the lineup! — so a lot of this extra power just feels like headroom for the future, not something you immediately sense when upgrading from a previous model.

It depends on who you ask.

While most reviews recommend waiting for the iPhone X, particularly if you currently own an iPhone 7 or iPhone 7 Plus, the iPhone 8 and iPhone 8 Plus are still respectable and more affordable updates with faster A11 Bionic chips, True Tone displays, improved cameras, wireless charging, and more.

These are solid year-over-year updates — at least as impressive as the iPhone 7 was over the iPhone 6S. If they hadn’t debuted alongside the iPhone X we’d be arguing about whether these are the most impressive new iPhone models since the iPhone 6.

The Verge's Nilay Patel was much less impressed, noting that he "can't think of a single compelling reason to upgrade from an iPhone 7."

After spending a week with the 8, I can’t think of a single compelling reason to upgrade from an iPhone 7. The 7 is still extremely fast, offers virtually the same design in a lighter package with a bigger battery, and will get almost every feature of the 8 with iOS 11. If you really want Qi wireless charging, you can get a slim $15 case that supports it. And if you’re dying for Portrait Lighting, there are tons of photo apps in the App Store that offer similar effects. Of course, if you're upgrading from anything older than an iPhone 7, the improvements in the camera and the overall speed of the phone are going to really impress you.

The iPhone X will continue to suck the air out of the room for the foreseeable future, but one thing has become clear after my week of testing: They might not have the X's style, but the 8 and 8 Plus are truly excellent phones that won't let Apple die-hards and new customers down.

My advice is to ask yourself how much you're willing to pay. If you don't mind giving up some of the futuristic features in the iPhone X, then the iPhone 8 models will give you the same power and performance and most of the same features of iOS 11 for hundreds of dollars less.

That is what is frustrating about the iPhone 8: In the past, Apple rarely raised prices when it made a better phone with more storage. This time, it releases an incremental update and charges $50 more. It’s the first time the most basic new iPhone costs $700.

The virtues I see in the iPhone 8 are niche: I’m glad you don’t have to spend $1,000 to get an improved camera and processor and even wireless charging, if that matters to you. But Apple’s confusing iPhone family now includes three pairs of practically identical phones: the regular and Plus versions of the iPhone 8, 7 and 6s. Don’t buy the spendiest one.

Zachari
In what photography world does this look good?

The main difference between the previous iPhones and iPhone 8 is it just support wireless Charing. Otherwise nothing major upgrade over iPhone 7 Plus.

Only if you consider new features to be the only difference... but literally every component was upgraded from the screen to the cameras. I don't think it's fair to say there are no major upgrades outside of wireless charging.
Score: 37 Votes (Like | Disagree)

The main difference between the previous iPhones and iPhone 8 is it just support wireless Charing. Otherwise nothing major upgrade over iPhone 7 Plus.

BMcCoy
Wireless charging would be sufficient to designate an 'S' model in the past - like Siri, TouchID, etc.

Chazzle
Correction:
The iPhone 7 scores in your Geekbench 4 chart are completely wrong. They should be right at the iPhone 7 Plus level.
Score: 12 Votes (Like | Disagree)

Sunny1990
The main difference between the previous iPhones [7 and 7 Plus] and iPhone 8 is it just support wireless Charing. Otherwise nothing major upgrade over iPhone 7 Plus. All minor spec bumps come at a higher price tag since Apple rised the price by $50.
Score: 11 Votes (Like | Disagree)
Read All Comments