Xcode 9 introduces Swift 4 and all of the SDKs necessary to develop apps for iOS 11, watchOS 4, tvOS 11, and macOS High Sierra, including the new Core ML framework for machine learning and ARKit for augmented reality. 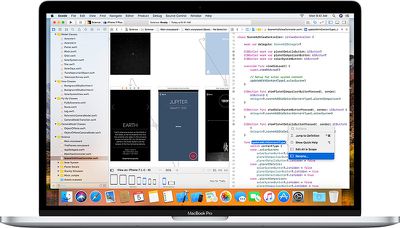 Faster search and wireless debugging for iOS and tvOS devices have been added, as have new debuggers for Metal. iOS playground templates now work in both Xcode and Swift Playgrounds, and Xcode server is built in, so there's no need to install macOS server.

There's a new source control navigator with integrated support for GitHub for better collaborative code management, and Simulator has been updated to behave more like a real device. It's also able to simulate multiple devices at once.

A full and extensive list of everything new in Xcode 9 is available from Apple's developer site, and an overview is also available on Apple's Xcode site. Many developers will already be familiar with the changes introduced as Xcode 9 has been in testing alongside iOS 11 and the other software updates since June.

Xcode can be downloaded from the Mac App Store for free. [Direct Link]

fairuz
Looking forward to updates to the editor. I still badly want Vim controls, though.
Score: 1 Votes (Like | Disagree)
Read All Comments