Apple's new Apple Watch Series 3 models support LTE and UMTS connectivity, but on T-Mobile, LTE connection speeds won't be available. The carrier is limiting the Apple Watch to a maximum speed of 512kb/s, which is more like a 3G connection than an LTE connection.

The speed limitation is noted in T-Mobile's fine print, which says the maximum wearables speed is 512kb/s. It's also noted on the pre-order page when adding an Apple Watch Series 3 to your cart. 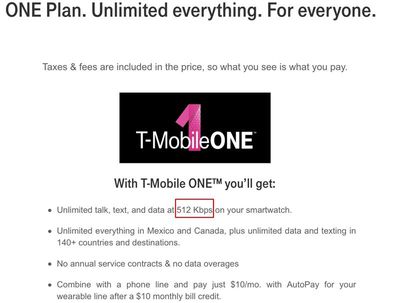 At issue is T-Mobile's ONE plan, which limits both tethering and all wearable devices to 512kb/s. While most users are unlikely to be streaming video or doing other tasks that require high connectivity speeds on the Apple Watch, the Apple Watch is also unlikely to be a data hog, so it's unclear why T-Mobile has this limitation in place.

A T-Mobile representative told MacRumors reader Tony that its "High Speed Data with paired DIGITS" plan would provide 4G LTE data. DIGITS is priced at $25 per month without autopay, and $20 per month with Autopay.

No other major carrier in the United States, including Sprint, Verizon, or AT&T appears to be throttling Apple Watch speeds with their standard unlimited plans.

All four of the carriers are charging the same $10 per month fee to add an Apple Watch to an existing iPhone plan, and each one is offering a limited time promotion that waives monthly fees for the first three months.

The LTE Apple Watch Series 3 models became available for pre-order early this morning, with new devices slated to arrive on Friday, September 22, the official launch date for the device.

The Apple Watch Series 3 plan on @TMobile will be $10/m for unlimited 4G LTE. Thanks for your feedback. We always listen & act! #uncarrier pic.twitter.com/LqsGJ6X6xq — John Legere (@JohnLegere) September 16, 2017

richard371
Seriously. These watches are hardly going to use any data/bandwidth on any carrier. They should be full lte and 5 a month max.
Score: 32 Votes (Like | Disagree)

zorinlynx
This is going to be bad for battery life.

If the device needs to transfer a chunk of data, it's best to power on the radio, transfer it as quickly as possible (even if it's a tiny amount) and shut off the radio again.

Throttling to 512kbps may not make a noticeable difference because the watch doesn't use that much data, but having to keep the radio powered up longer because those small transfers take time is going to hurt battery life.

T-Mobile shouldn't be doing this.
Score: 22 Votes (Like | Disagree)

... I can literally watch HighDef YouTube on my laptop with 512k down... What are you possible doing on your watch that would make you notice a throttle like that?

Z400Racer37
... I can literally watch HighDef YouTube on my laptop with 512k down... What are you possible doing on your watch that would make you notice a throttle like that?
Score: 9 Votes (Like | Disagree)