Spotify has introduced an iMessage application in its latest update this week. As spotted by iGeneration, Spotify in Apple's Messages app allows you to search the entire music streaming service for a specific song and send it to a friend. When they receive it, they'll be able to listen to a 30-second clip, and then tap a button to jump into Spotify to check out the whole track. 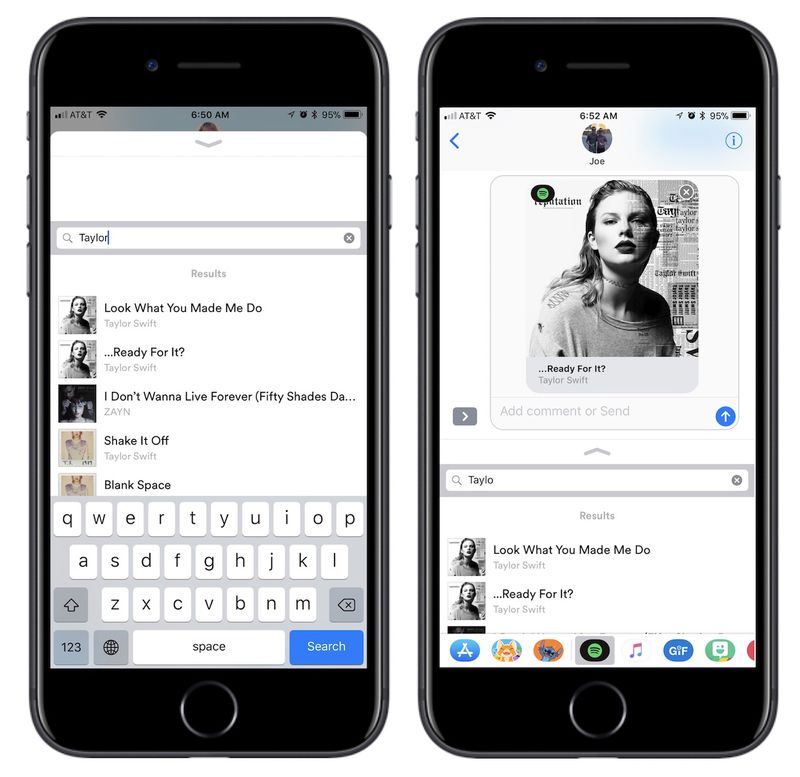 This differs slightly from the Apple Music iMessage app, which lacks a search function completely. If you want to share a specific Apple Music song with a friend, it has to be in your recently listened track list, meaning you'll have to jump to the Apple Music app, search for it, play it, and then navigate back to Messages to find it in the app drawer. Apple Music's big advantage is that you can listen to the full track right in Messages.

The design is also different, with Spotify's iMessage app displaying a larger image for the song's album artwork, while Apple Music's remains thin and more horizontally-aligned with a play button directly in the iMessage. 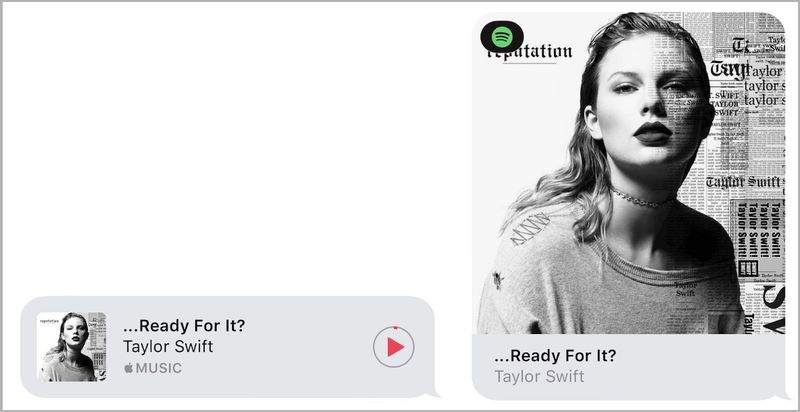 In recent Spotify news, the company's Web Player is now incompatible with Apple's Safari browser, reportedly due to Google's Widevine media optimizer plugin, which Spotify requires for music streaming on the web and Apple opposes due to potential security issues. Spotify will also debut an official Apple Watch app in the future, although news of that release now dates back to April 2017 and there's since been no other word from Spotify or the app's developer Andrew Chang, besides a few mentions on Reddit over the summer.

unobtainium
How about an Apple Watch app or Apple TV app instead?
Rating: 8 Votes

xDKP
They shouldn’t have used a single minute on this, before releasing the Apple Watch app - if I weren’t so tied into all my playlists etc. I would have punished them a long time ago. Offline play on the watch can’t come soon enough
Rating: 4 Votes

Spotify is happy to punish it’s Apple user base just to stick it to Apple. It’s upsetting.


Quite the contrary. Apple is locking out Spotify. There's quite a bit of evidence. In April Spotify acquired Snowy and was said to be working on a Watch app. Fast forward several months and go look at the Apple Watch app thread in the Spotify community forum. Spotify posted an official updated on Aug 23 saying the status of an app is "NOT RIGHT NOW".

Apple is sticking it to Spotify because they are going around the app store 30% fees. My guess is Spotify will be locked out of the Watch until they cave. They are losing way more than Apple is in this fight.
Rating: 1 Votes
[ Read All Comments ]