With every new iPhone release, Apple introduces a new "magical" feature like Live Photos, and in the iPhone X, that new unique, Apple-only feature is Animoji, a new set of emoji-style characters that animate based on an iPhone user's facial expression. 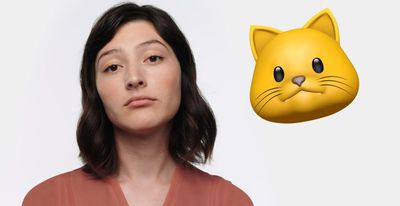 Animoji take advantage of the new TrueDepth front-facing camera, which powers Face ID and features several new 3D sensors to detect your facial expressions. The TrueDepth camera analyzes more than 30,000 invisible dots projected onto your face to get a precise depth map that's able to accurately translate your own facial movements to the Animoji.

When used for Animoji, the TrueDepth camera is able to analyze more than 50 muscle movements in different areas of your face to mimic your speech patterns and expressions. It detects movement of the eyebrows, cheeks, chin, eyes, jaw, lips, eyes, and mouth.

Animoji exist in the Messages app alongside stickers, emoji, and other Messages apps. You can use Animoji to record and send messages to friends, with the characters mimicking your movements and using your voice.

Animoji are exclusive to the iPhone X and won't be available until the device launches later this fall. Apple plans to accept iPhone X pre-orders starting on October 27, with an official launch coming on November 3.

0007776
It probably was a lot of fun for the developers to make, but when features like this make it into the keynote it is a good sign that the smartphone market is plateauing.
Score: 58 Votes (Like | Disagree)

Smartass
When animojis are the main selling point of a phone you know its bad.
Score: 24 Votes (Like | Disagree)

convergent
I finally see why Tim says Apple is making the world a better place... animated poop emojis... got it. :rolleyes:

Seriously, wouldn't it be a little more personal to get an actual video of the person talking to you... which you can already do? I think the novelty of this would wear off pretty quickly with all but pre-teen girls.
Score: 20 Votes (Like | Disagree)

ScottButler
I love how Jony Ive's first video appearance in ages featured him as a Unicorn, Poop and Chicken emoji
Score: 15 Votes (Like | Disagree)

LordQ
Not the best selling point for a $999 phone.
Score: 15 Votes (Like | Disagree)
Read All Comments

Tuesday October 4, 2022 3:30 am PDT by Hartley Charlton
The European Parliament today voted overwhelmingly in favor of enforcing USB-C as a common charging port across a wide range of consumer electronic devices, including the iPhone and AirPods, by the end of 2024. The proposal, known as a directive, forces all consumer electronics manufacturers who sell their products in Europe to ensure that a wide range of devices feature a USB-C port. This...
Read Full Article • 336 comments