Apple has announced that its retail store at the Simi Valley Town Center in Simi Valley, California, located approximately 30 miles from downtown Los Angeles, will permanently close later this month. 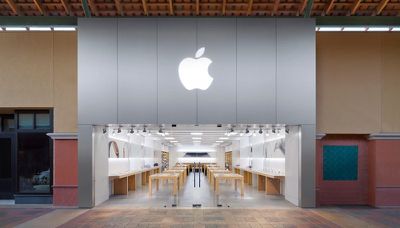 Apple Store at Simi Valley Town Center
Friday, September 15 is the last day the store will be open. Apple provided thanks for "over 10 great years" and advised customers to visit its retail store list to find a nearby location. Apple Simi Valley originally opened in May 2006.

Apple hasn't publicly commented on the reason for the store's closure, but multiple tipsters have informed MacRumors that the location may have suffered from low sales and customer traffic — a rarity for an Apple Store.

At a minimum, the closure doesn't appear to be related to Apple's ongoing store renovation process across the United States.

There were high hopes for Simi Valley Town Center when it opened in 2005, but the outdoor shopping mall hasn't been as bustling as envisioned. The less-than-expected customer traffic may be partially due to an expansion of The Oaks Shopping Center in nearby Thousand Oaks, California in 2008.

Apple itself has a retail store at The Oaks that opened in October 2005, and several other locations in the greater Los Angeles area.

Over the years, Simi Valley Town Center has lost several retailers, including Abercrombie & Fitch, Hollister, Coach, American Eagle, Cache, Forever 21, and PacSun, according to the Simi Valley Acorn. Macy's also merged its standalone menswear store into its main location at the shopping center earlier this year.

A tipster informed us that Simi Valley Town Center may eventually be repurposed as an outlet mall, which could explain Apple's departure.

MacRumors has yet to learn whether the store's employees will be laid off or offered the opportunity to transfer to another location.

Apple did not immediately respond to a request for comment.

Update: In a statement provided to Quartz, Apple said it has "invested significantly in the surrounding stores" where many of the Simi Valley location's employees will be working.

We’re grateful to the millions of customers who have visited Apple Simi Valley since it opened more than 10 years ago. We’ve recently invested significantly in the surrounding stores, creating bigger spaces that feature our latest design. Apple Simi Valley will close September 15, the day before we re-open our renovated Apple Topanga. We invite our customers to visit us at Apple Topanga or at nearby Apple The Oaks, where many of their favorite Simi Valley Apple employees will be working.

Is this the first time an Apple Store has been permanently closed? Because I don't remember hearing anything like this happening.

I know one small one closed in Japan at some point in the past year. But it's definitely extremely rare.

GizmoDVD
This mall has been dead for the last 5-6 years. The Apple Store would still be somewhat busy but there are other options not far away (Thousand Oaks is 8 miles and Woodland Hills maybe 12).

This is the first I've heard the mall could be repurposed as an outlet mall. They just got a brand new movie theater and a few bigger stores (Marshalls for example)

I would ALWAYS go here for service because he wait time was really low and most fixes were done within an hour.

Thousand Oaks was recently closed for 6 months during a remodel. Simi store was pretty busy during that time.

Corrode
Never heard of Simi Valley so I looked it up. Then I searched for all the Apple Stores in that area and around LA and holy crap there are a lot of Apple Stores around there! There are even some within walking distance to each other.

I thought I was lucky to have two in my city but California is ridiculous.
Score: 6 Votes (Like | Disagree)

Junior117
Is this the first time an Apple Store has been permanently closed? Because I don't remember hearing anything like this happening.
Score: 6 Votes (Like | Disagree)

A lot of stores in the LA area but it's a bit deceiving because traffic is so horrible stores miles away from each other could also be 30 minutes apart. That is why there are so many stores.
Score: 5 Votes (Like | Disagree)

wilef
I've been in the area for over a decade and saw the Town Center go up to lots of fanfare, then quickly plummet in popularity when The Oaks added their own outdoor section of the mall as well as a premium movie theater. In hindsight, an outdoor mall in bloody hot Simi Valley was a bad idea. Not sure the outlet mall would succeed either as the Camarillo outlets are huge and not far away.
Score: 4 Votes (Like | Disagree)
Read All Comments

All the Apple Black Friday Deals You Can Get Today

Friday November 25, 2022 4:40 am PST by Mitchel Broussard
Black Friday is finally here, and Apple products are seeing major discounts this year. In this article, you'll find every Apple device with a notable Black Friday sale. We'll be updating as prices change and new deals arrive, so be sure to keep an eye out if you don't see the sale you're looking for yet. Note: MacRumors is an affiliate partner with some of these vendors. When you click a link...
Read Full Article • 24 comments