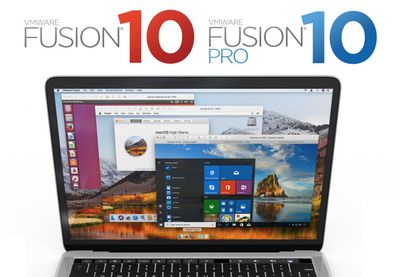 Fusion 10 can run hundreds of operating systems, ranging from the latest Windows 10 versions to lesser-known Linux distributions. It will be able to run the Windows 10 Fall Creators Update expected to launch in October.

VMware will also be releasing Fusion 10 Pro, targeted at IT professionals and developers. The premium version features enhanced vSphere and networking controls, support for REST APIs, integration with VMware PhotonOS, and support for Microsoft's new virtualization-based security features such as Credential Guard.

Additionally, customers who purchase Fusion 8.5 or Fusion 8.5 Pro between August 22 and November 1 this year will be eligible for an upgrade to Fusion 10 or Fusion 10 Pro, respectively, at no additional cost.

dannys1
No one wants to name their product version 9.
Score: 14 Votes (Like | Disagree)

I have a feeling the next keynote is going to showcase the touch bar even more than ever since its here to stay. It will be like emotions never going away.

Why does everyone talk about emoticons when they reference the Touch Bar? I have had a MacBook for a couple of months now, I love love love the Touch Bar and use it hundreds of times a day. I've never once used it to pick an emoticon.
Score: 12 Votes (Like | Disagree)

Why does everyone talk about emoticons when they reference the Touch Bar? I have had a MacBook for a couple of months now, I love love love the Touch Bar and use it hundreds of times a day. I've never once used it to pick an emoticon.

Because people who can't afford things like to roll out tired untrue cliches (like banging on about USB-C dongles) to make themselves feel better.
Score: 10 Votes (Like | Disagree)

Why does everyone talk about emoticons when they reference the Touch Bar? I have had a MacBook for a couple of months now, I love love love the Touch Bar and use it hundreds of times a day. I've never once used it to pick an emoticon.

I think there are a lot of unhappy people in the world. And denigrating something (usually without even giving whatever it is a try) makes people feel better, and gives them a tiny blip of power.
Score: 8 Votes (Like | Disagree)

manu chao
So, the rumours from one or two years ago that VMware had dissolved the Fusion team and was withdrawing from the Mac virtualisation market weren't quite accurate.
Score: 7 Votes (Like | Disagree)
Read All Comments