We've learned a lot about the upcoming iPhone 8 thanks to HomePod firmware that Apple accidentally released to the public, and the latest detail highlights what we can expect from the front and rear cameras in the device.

Uncovered by Brazilian site iHelp BR, code within the firmware seems to hint at front and rear cameras capable of recording video in 4K at 60 frames per second. 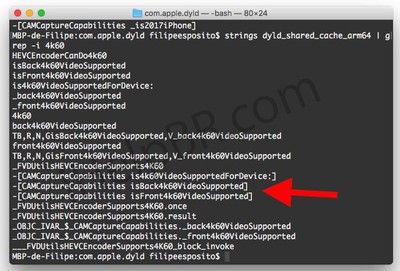 Currently, the rear camera in the iPhone 7 and the iPhone 7 Plus is able to capture 4K video at 30 frames per second, while the front-facing camera is limited to 1080p recording. Though these specifications are mentioned, it's not yet entirely clear if this is functionality that we can expect to see in the iPhone 8, but the improved frame rate could be useful for the augmented reality applications coming in iOS 11.

The HomePod firmware has provided a wealth of information about the iPhone, and in addition to these camera changes, it's also confirmed infrared facial recognition, the general shape of the iPhone 8, and features like a split sensor bar and tap to wake.

dreadlord
Engineer: New HomePod firmware is ready. Should we release it?
Tim Cook: Are you sure you didn't miss any iPhone 8 feature to include in the firmware?
Engineer: Do not worry, all iPhone 8 feature information is included.
Tim Cook: Release it.
Engineer: Ok.
Score: 51 Votes (Like | Disagree)

AngerDanger
The first person to jailbreak the HomePod better put a magic 8 ball app on it.

"HomePod, will I live a long and happy life?"

szw-mapple fan
This might be a side effect of the facial recognition system requiring high resolution front facing cameras.
Score: 22 Votes (Like | Disagree)

CarlJ
Next headline to appear on MacRumors:
"HomePod firmware contains name of winning team in next year's SuperBowl".
Score: 21 Votes (Like | Disagree)

Berti10
It surprises me, that nearly 1 month before the Keynote there are absolutly no detailed rumors about the 7S!
Score: 19 Votes (Like | Disagree)