Apple shipped an estimated 2.8 million Apple Watch units in the June quarter, an increase of 56 percent from an estimated 1.8 million shipments in the year-ago quarter, according to a new report by research firm Strategy Analytics. 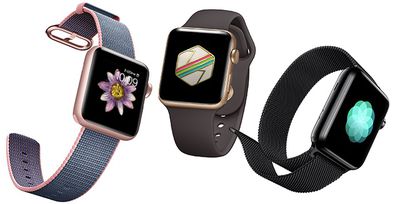 Xiaomi shipped an estimated 3.7 million wearables in the June quarter, according to Strategy Analytics, while Fitbit on Wednesday reported sales of 3.4 million devices in the same period, down from 5.7 million a year ago.

"Apple has for now lost its wearables leadership to Xiaomi, due to a lack of presence in the sizeable fitness band subcategory," said Cliff Raskind, Director at Strategy Analytics. "However, the rumored upcoming Watch Series 3 launch with enhanced health tracking could prove to be a popular smartwatch model and enable Apple to reclaim the top wearables spot later this year."

It's important to acknowledge these are estimated figures, and that shipments do not necessarily reflect sales. And, as mentioned, Xiaomi doesn't participate in the high-end smartwatch market, and Apple doesn't compete in the low-end fitness tracker market. It's essentially an apples to oranges comparison.

Apple reported "Other Products" revenue of $2.7 billion in the June quarter, up 23 percent on year.

In its post-earnings conference call, Apple CEO Tim Cook once again talked up how well Apple Watch is supposedly selling.

"Sales of Apple Watch were up over 50 percent in the June quarter," said Cook. "It's the number one selling smartwatch in the world by a very wide margin."

"Apple Watch is having a positive impact on peoples' health and daily lives, and motivating them to sit less and move more," he added. "With features like built-in GPS and waterproofing, Apple Watch Series 2 is the perfect companion for hiking, running, and swimming."

Cook has made similar statements in the past. In the March quarter, he noted that sales of Apple Watch nearly doubled year over year. In the December quarter, he announced that Apple Watch had its best quarter ever.

Strategy Analytics doesn't disclose its exact methodology of calculating Apple Watch shipments for competitive reasons, but executive director Neil Mawston has told MacRumors the research firm uses "a blend of channel checks, financial analysis, and other sources" when asked in the past.

"It is the same methodology we have used for phones since the 1990s and for wearables since the modern market first emerged circa 2013," he added.

The focus now turns to the fall, when Apple is rumored to debut Apple Watch Series 3 models, potentially alongside its new lineup of iPhones.

Seanm87
Every time apple releases something new everyone always says how it's going to flop and apple always proves them wrong.

And lo and behold they all sold like hotcakes. I wonder why so many supposedly apple fans on here want the company to fail so badly.

Andres Cantu
Definitely seeing a lot more people with one than in 2015.
Score: 16 Votes (Like | Disagree)

Amazing Iceman
This "Wearables" category could include a 'rubberband with a sensor'.

Wouldn't it make more sense to do this comparison in the "Smart Watch" category instead?
Score: 13 Votes (Like | Disagree)

Guess Mercedes lost their leadership of the auto Market 110 years ago; why on earth didn't they realize they were doomed back then!
Score: 8 Votes (Like | Disagree)

Lesser Evets
After 2 years, 99% of consumers are still scratching their heads and trying to figure out what they are good for.

It isn't that they are useless, but they don't add anything practical to most people's lives or productivity. They are profligate kitsch-novelty.
Score: 8 Votes (Like | Disagree)

After 2 years, 99% of consumers are still scratching their heads and trying to figure out what they are good for.

It isn't that they are useless, but they don't add anything practical to most people's lives or productivity. They are profligate kitsch-novelty.

I would take the stance that their sales figures alone indicate that people not only know what they are getting, they like it so much they are telling others to buy it.

And the battery life seems to be improved dramatically in the 2nd gen. I can go at least 2 days between charges, although I typically place on my nightstand to charge at night (I love using it as my "clock" with it's auto awake function). But if I only charged it while I was showering or driving to work, I could wear it the rest of the time including while I sleep without issue.

I only bought one since at the time, it was cheaper than getting my Omega repaired and I needed a watch (hard to NOT wear one when you are used to having one on all the time). Now I can't live without it. The notifications alone make it perfect for me (I'm in a LOT of meetings throughout the day). No more being rude and pulling out my phone every time it buzzes.

And it has actually made me more aware of my heakth tracking. I don't know...I love it...I know it can and will get better, but for me, it's awesome.
Score: 7 Votes (Like | Disagree)
Read All Comments