Florida Company Sues Apple Over Apple TV's 'What Did He Say?' Feature

Florida company CustomPlay filed a patent infringement lawsuit against Apple today, claiming a Siri feature that allows fourth-generation Apple TV users to rewatch a portion of video with closed captioning copies its movie companion software. The case has yet to be assigned to a judge. 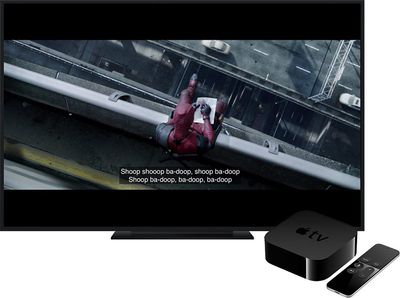 Using the Siri Remote, Apple TV users can ask "what did he say?" or a similar question and tvOS will rewind the TV show or movie by several seconds and resume playing with closed captioning temporarily enabled. This way, if you missed what someone said, you can conveniently go back and listen a second time.

Skip to roughly the 1:02:13 mark of Apple's September 2015 event video below to see a live demo of the feature.

Skip to roughly the 1:02:13 mark of the video
CustomPlay owner Max Abecassis essentially argues he invented the idea first, as the owner of U.S. Patent No. 6,408,128 B1, filed in 1998 and granted in 2002. The patent covers a replay function with subtitles activated by either remote control or voice control, much like tvOS's feature.

An excerpt from the patent's description:

In its complaint, filed with the U.S. District Court for the Southern District of Florida, CustomPlay says it has software that uses the patent available for download on its website. The company's homepage lists apps such as PopcornTrivia and CustomPlay, each available on the App Store for iPhone.

For one app, named One Screen, CustomPlay describes a "What?" feature that does sound similar to the Apple TV's feature.

The What? function rewinds the movie a user-defined amount of time, e.g. 20 seconds, and continues playback with the subtitles automatically enabled only during the replayed portion.

One Screen, however, happens to be the only app listed as "coming soon" on CustomPlay's website. The company said it still intends to make the software available to end users, but it's unclear when. It's also unclear if similar functionality is included in its PopcornTrivia and CustomPlay apps, or DVD software for PCs.

CustomPlay's so-called "What?" feature
CustomPlay says it contacted Apple about the potential for an exclusive business relationship in 2014. The company believes Apple is aware of its patent and, without a license, proceeded to implement its patented technology in its tvOS operating system for the latest Apple TV model, launched October 2015.

Court documents obtained by MacRumors show CustomPlay seemingly mailed letters to Apple CEO Tim Cook and three iTunes executives in July 2014, and Abecassis sent a few follow-up emails to Cook later in the year, but it's unclear if Apple responded. There is no indication of Apple responding at the very least.

CustomPlay's website says it is affiliated with Nissim Corporation, which appears to be a non-practicing entity, also owned by Abecassis. Nissim sued Apple last September for allegedly infringing upon seven patents related to DVD specifications. The two companies reached an unknown settlement in December.

Nissim's website says it has brought lawsuits against major companies such as Apple, Paramount Pictures, Time Warner, and 20th Century Fox Home Entertainment. All of those companies, excluding Apple, are also listed as Nissim's licensees, alongside Acer, Bose, Dell, HP, Lenovo, LG, Microsoft, Sony, and others.

CustomPlay is seeking damages of an undetermined amount from Apple, plus legal costs, and it has requested a jury trial.

Brandhouse
I'm going to dream up an idea, maybe I'll watch 'Black Mirror' for an idea that in the future might be feasible, but isn't now, patent it and just wait so one day I can sue everyone.

Some people need a hard smack over the head.
Score: 52 Votes (Like | Disagree)

But I didn't write something to those words, so your patent doesn't apply in this case.

Brandhouse and Gasu E., I found your and my posts uncomfortably close in both content and timing, so I have just now applied for and received a provisional patent on claiming "Jinx!" in an online web-format message board. The two of you owe me a Coke or I'll see you in court.
Score: 28 Votes (Like | Disagree)

cerote
Well the patent is spot on to what it does. Unlock some other ones battling with very vague patents.
Score: 19 Votes (Like | Disagree)

I'm going to dream up an idea, maybe I'll watch 'Black Mirror' for an idea that in the future might be feasible, but isn't now, patent it and just wait so one day I can sue everyone.

Some people need a hard smack over the head.

CIA
Usually I side with Apple on these things, but based on the description, Apple's version really does seem to be incredibly similar to the patent.
Score: 10 Votes (Like | Disagree)
Read All Comments