Apple Maps has been updated with comprehensive transit data in several higher populated areas of Nevada, enabling iPhone users to navigate with public transportation directions throughout the Silver State. 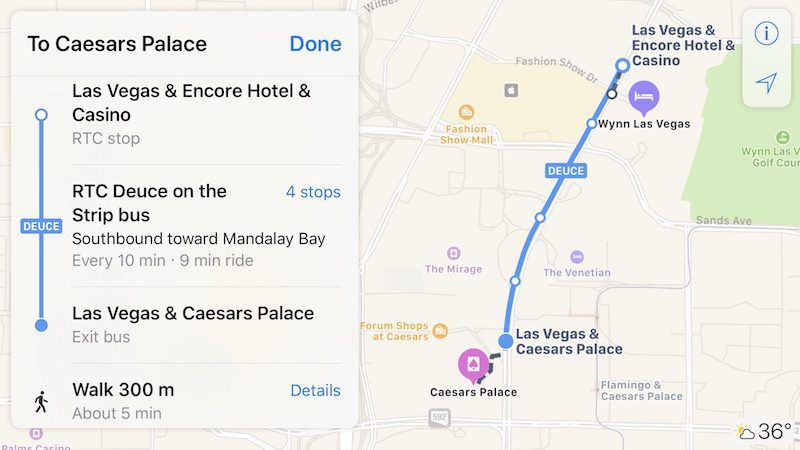 Newly supported areas include Las Vegas, including the nearby cities of North Las Vegas and Henderson, as well as the state capital Carson City and the Reno-Sparks metropolitan area in Western Nevada.

In Las Vegas, Apple Maps can provide directions for the Las Vegas Monorail and RTC Transit buses, including The Deuce and The SDX operating in and between the Las Vegas Strip and Downtown Las Vegas.

Many popular destinations are supported in Las Vegas, including McCarran International Airport and the Las Vegas Convention Center.

Apple Maps can also provide directions for Silverado Mainline buses, which travel between each of the cities, such as Reno to Las Vegas.

For a complete list of cities with Apple Maps transit, visit the iOS Feature Availability page on Apple's website.

Monday April 6, 2020 4:38 am PDT by Tim Hardwick
Further references to Apple's upcoming low-cost iPhone have appeared online, one on a Chinese e-commerce website and another on Verizon's smartphone trade-in page. Spotted by tech blog MySmartPrice, Chinese retailer JD.com has published a placeholder for Apple's so-called "iPhone 9" that includes a teaser image of a veiled smartphone, but other than that it lacks any particularly revealing...
Read Full Article • 97 comments

Thursday April 2, 2020 4:06 pm PDT by Juli Clover
Apple's new low-cost iPhone is set to launch as early as Friday, April 3, according to a new report from 9to5Mac that cites a tip from a "highly trusted reader." The site says that while it can't be certain about the launch date, "Apple could reveal and begin taking orders for the new iPhone as soon as tomorrow." The iPhone 8 Apple is said to be planning to call the new iPhone, which is...
Read Full Article • 380 comments