Apple Maps has been updated with comprehensive transit data in Calgary, Alberta, enabling iPhone users in the Canadian city to navigate with public transportation, including the CTrain light rail system and buses. 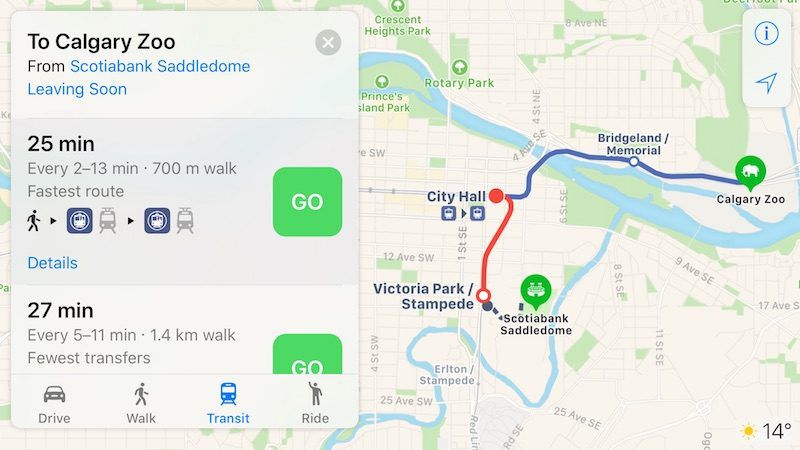 Apple Maps enabled transit routing in Calgary just in time for the 2017 Calgary Stampede, which runs between July 7 and July 16.

For a complete list of cities with Apple Maps transit directions, visit the iOS Feature Availability page on Apple's website.

Now watch as Apple, much like the rest of Canada, forgets that Edmonton has essentially the same population as Calgary.

And actually, now that I think about it, how on earth is this not available in Vancouver of all places? Probably the most comprehensive transit system in the country.

Edmonton is coming soon. You can see that they’ve started to map out the LRT stations in red, and have also added bus stops.

DingeZ
"One city at a time" isn't exactly accurate. It is mostly a cluster of cities, situated around a mayor city (Calgary in this case) and they have released whole countries at once before (Japan, GB & the Netherlands). But the reason why is because they want to do it right. Every city has its specifics, but while Google only dumps the data in the system and then draws straight lines between the stations, Apple draws all lines geographically accurate and includes the lay-out of stations with entrances and exits. Also, Apple adheres to local conventions, like east-, west-, out- or inbound, or even complex train numbering codes like in Paris.
Score: 3 Votes (Like | Disagree)

Seandroid
Now watch as Apple, much like the rest of Canada, forgets that Edmonton has essentially the same population as Calgary.

And actually, now that I think about it, how on earth is this not available in Vancouver of all places? Probably the most comprehensive transit system in the country.

Corrode
Timing coincides with the first day of Calgary Stampede. Goes to show that if you want your city added, just hold a big event.
Score: 1 Votes (Like | Disagree)

Edmonton is coming soon. You can see that they’ve started to map out the LRT stations in red, and have also added bus stops.

Someone up at Apple cares that we exist!
Score: 1 Votes (Like | Disagree)
Read All Comments

Tuesday April 7, 2020 10:06 am PDT by Juli Clover
Apple today released iOS and iPadOS 13.4.1, minor updates that come two weeks after the release of iOS and iPadOS 13.4, major updates that introduced iCloud Folder Sharing, a new Mail toolbar, trackpad support for the iPad, and more. The iOS and ‌iPadOS‌ 13.4.1 updates are available on all eligible devices over-the-air in the Settings app. To access the updates, go to Settings > General...
Read Full Article • 66 comments