Steve Jobs' iconic black turtleneck will be making a comeback of sorts this summer, with the company behind the original garment, Issey Miyake Inc., announcing a new version coming this July for $270 and called the "Semi-Dull T" (via Bloomberg).

The model that Jobs wore was officially retired from production following his death in 2011, and a protege of Miyake, Yusuke Takahashi, is said to be the designer of the new turtleneck. 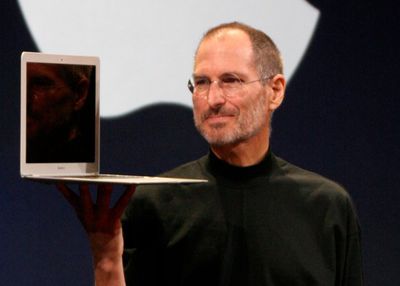 The new garment is said to have the same slim black aesthetic as the ones worn by Jobs throughout the latter half of his career as Apple CEO, particularly on stage during major product announcement keynotes.

Don’t call it a comeback. The company is at pains to state that the turtleneck, designed by Miyake protégé Yusuke Takahashi with a trimmer silhouette and higher shoulders than the original, isn’t a reissue. And even if the garment were a straight-up imitation, its importance as a cultural artifact is more about the inimitable way Jobs wore it.

All the same, the company said that it's not a reissue or "comeback," because it has an even "trimmer silhoutte and higher shoulders" than the one Jobs wore, including during his final Apple keynote appearance at WWDC 2011.

The new Semi-Dull T
Bloomberg's report on the turtleneck includes a bit of the shirt's origin story, wherein Jobs unsuccessfully attempted to pitch a vest-like uniform for workers at Apple. Instead, the former Apple CEO came up with a uniform for himself based on his existing wardrobe of jeans, sneakers, and "stacks of black turtlenecks" he had already purchased from Miyake.
Tag: Steve Jobs
80 comments

keysofanxiety
Does anybody know if the sleeves are soldered, or are they user-upgradable?
Score: 13 Votes (Like | Disagree)

BJMRamage
wow, I didn't realize turtlenecks were that expensive.
Score: 11 Votes (Like | Disagree)

So where can I buy the mock-neck of similar quality and design for, say, 15 or 20 bucks? Anyone? Anyone? Dead serious.

Yes. You can also get something very similar at... anywhere clothing is sold. And a few other places.
Score: 8 Votes (Like | Disagree)

Saturday May 21, 2022 9:00 am PDT by Hartley Charlton
With around four months to go before Apple is expected to unveil the iPhone 14 lineup, the overwhelming majority of rumors related to the new devices so far have focused on the iPhone 14 Pro, rather than the standard iPhone 14 – leading to questions about how different the iPhone 14 will actually be from its predecessor, the iPhone 13. The iPhone 14 Pro and iPhone 14 Pro Max are expected...
Read Full Article • 295 comments