Apple today updated its developer news site to remind developers about 64-bit requirements for both Mac and iOS apps.

Apple has required all new iOS apps and app updates submitted to the iOS App Store to support 64-bit since June of 2015. Since then, Apple has begun phasing out support for 32-bit apps, and plans to stop supporting them all together with iOS 11. 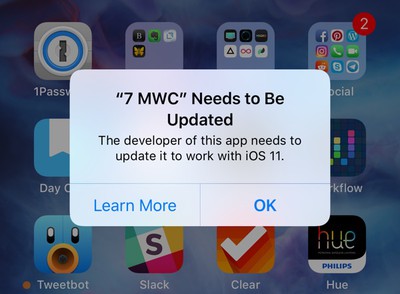 While Apple has enforced 64-bit support for several years, there are still a number of older iOS apps that have not been updated since 2015 but remain in use. When attempting to open a 32-bit app on iOS 11, it will not run and users will see a popup that says "The developer of this app needs to update it to work with iOS 11."

As a reminder, new iOS apps and updates submitted to the App Store must support 64-bit. Support for 32-bit apps is not available in iOS 11 and all 32-bit apps previously installed on a user's device will not launch. If you haven't updated your app on the App Store to support 64-bit, we recommend submitting an update so your users can continue to run your apps on iOS 11, which will be in the hands of hundreds of millions of customers this fall.

At WWDC, Apple announced plans to start phasing out 32-bit Mac App Store apps as well. Starting in January of 2018, Apple will require all new Mac apps submitted to the Mac App Store to support 64-bit, and all existing apps must implement support by June of 2018. According to Apple, macOS High Sierra will be the last version of macOS that will support 32-bit apps "without compromise."

At WWDC 2017, we announced new apps submitted to the Mac App Store must support 64-bit starting January 2018, and Mac app updates and existing apps must support 64-bit starting June 2018. If you distribute your apps outside the Mac App Store, we highly recommend distributing 64-bit binaries to make sure your users can continue to run your apps on future versions of macOS. macOS High Sierra will be the last macOS release to support 32-bit apps without compromise.

When phasing out 32-bit apps on iOS devices, Apple gave both end users and developers ample notice and several warnings, and the company plans to follow the same path as it phases out 32-bit Mac apps.

Along with reminding developers about its app requirements, Apple today also announced the availability of transcripts for all of its WWDC 2017 videos, making it easier for users to find and share specific information that was covered at the event. Transcripts can be searched by keyword, with those keywords linked to the specific times when they were mentioned.

Actually there are real issues here.

First; supporting 64 bit and 32 bit apps results in a lot of extra storage usage that can go to new features. If you want to offer your customer the best value in hardware you don't want to be installing a lot of worthless software to support old apps.

Second; developers that can't or won't upgrade software are often well behind the curve when it comes to modern software practices. This results in clunky software that fails to leverage modern features. It all means the bugs and other problems aren't being fixed.

Third; Long term, trying to support 32 bit in iOS means that you need the associated circuitry in the CPU!!! This means die space that goes to support unneeded functionality. I actually believe Apples goal is to migrate to completely clean 64 bit hardware for iOS devices. This saves Apple power or frees up die space for additional functionality. Some of that die space night very well go to the GPU to better support AI functionality or it might even mean an independent AI unit.

Forth; While at times it may be required to run old software that frankly is better done on old hardware with the corresponding software. I see this a lot in the automation industry where old software ends up unsupported and only running on old versions of Windows. You can end up banging your head against the wall trying to run old software on modern machines. It gets even worst if the software is tied to old unsupported hardware.
Score: 15 Votes (Like | Disagree)

Then maybe Micro$oft should get off their butts and turn out a new 64 bit version, instead of foisting an antique off on people.

Bill Av
I'm planning on leaving my iPad Pro on 10. It'll be my game machine.
Score: 6 Votes (Like | Disagree)

I am going to lose a lot of apps.

This could be a chance to discover apps that you may find are better and are supported by more engaged developers.
Score: 6 Votes (Like | Disagree)

Brien
Sucks for the people who bought I am Rich.
Score: 5 Votes (Like | Disagree)

borgqueenx
Bye bye many games i enjoyed over the years :(
Score: 5 Votes (Like | Disagree)
Read All Comments