Eschewing the more traditional real-time chat channels common to services like Slack, the Twist interface instead splits channels into topic-specific threads that function like online message boards, while real-time conversations are initiated through separate direct messages. 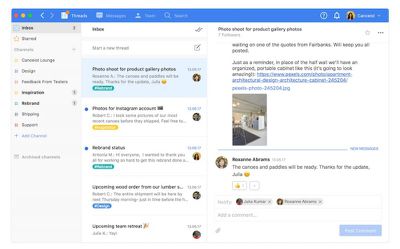 New chat thread posts and replies are corralled into an inbox, allowing users to check and respond to collated messages when it's convenient for them to do so. The idea is that users no longer have to spend time scrolling through channel threads to find conversations that are relevant to them, and they won't be distracted by notifications and pop-ups when they're working.

In line with this philosophy, Twist has no online presence indicator, which is supposed to prevent other team members from expecting an immediate response whenever they post something. The developers say the UI and interaction method aims for a better balance between timely communication and distraction-free work.


Twist launched in beta in January but officially launched today. In terms of pricing, the communication platform has a free tier that limits archived and searchable messages to one month, while the Unlimited tier costs $6 a month, or $5 a month if paid annually.

Twist can be downloaded for free on Mac and iOS devices, with a web interface also available.

I'm just going to wait until Slack inevitably copies the only novel idea here: threads within channels... (Game-changer btw for my teams...)

Slack already has threads, just a different way of doing it.
Score: 2 Votes (Like | Disagree)

I'm still not sure why there isn't one of these where it locks into a blockchain. Paying for these things seems... outdated.

How does a blockchain provide any value to a messaging application? Are you just trying to say fancy terms?
Score: 1 Votes (Like | Disagree)

Lostanddamned
Have… Have they just invented email?
Score: 1 Votes (Like | Disagree)

AronDraws
Looks an awful lot like Slack to me. Ive had no problem keeping up to speed with stuff we discuss on there since we have search.
Score: 1 Votes (Like | Disagree)
Read All Comments