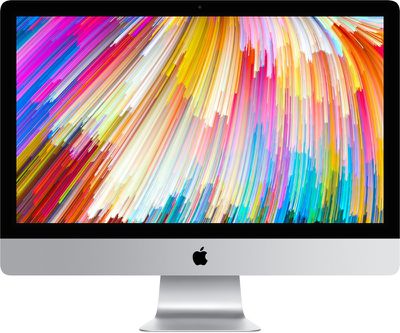 Early benchmark results for the new 27-inch iMac have already surfaced on Geekbench that suggest the 2017 models are up to 15% faster in multi-core CPU performance compared to last-generation models.

Apple's new high-end 27-inch iMac stock configuration with a 3.8GHz quad-core Core i5 processor has an average multi-core score of 14,886, for example, compared to 12,953 for the equivalent 2015 model.

John Poole of Primate Labs, the creators of Geekbench, said the new 27-inch iMac also has up to 80% improved graphics performance compared to the equivalent 2015 models at compute tasks such as image processing.

That will undoubtedly change in December when Apple launches the iMac Pro with workstation-class tech specs, including up to an 18-core Intel Xeon processor, top-of-the-line Radeon Pro Vega graphics, up to 4TB of SSD storage, and up to 128GB of ECC RAM. iMac Pro will start at $4,999 in the United States.

Yes. The GPU chart is missing.

Feel like I'm playing spot the difference. Are those two charts identical?

MacsRuleOthersDrool
What's utterly fascinating is that the "old, tired" 2013 Mac Pro still beats the pants off everything but one 2017 iMac configuration.

Putting this horsepower in that silly iMac form factor will make this a toaster.

Hey, Apple product designers, engineers and product managers -- stop the manufacturing line! This random guy on this forum found something you somehow all missed.
Score: 9 Votes (Like | Disagree)

So if someone does not have a similar opinion about something as you, he immediately becomes a hater?
Score: 9 Votes (Like | Disagree)

the fact you're bringing it up as "care to play haters' means you don't actually undersetand how computers work.

the test being shown is a multi-core/threaded benchmark. the Mac Pro's that still appear higher are 8+ core variants. Where the new i5 and i7's in the 2017 iMac's are 4 cores only. (8 thread for the i7). And since these are benchmark numbers only, only reflect a perfect situation where specific sorts of calculations are accounted for.

real world performance and other factors are also important here, beyond just the benchmark numbers. If there was a 2017 Mac Pro that also had 8 or 10 core CPU's, it would likely trounce the 2012 Mac Pro's completely.

"hate" has nothing to do with it
Score: 9 Votes (Like | Disagree)

I'd like to take your side but the 4-core base model pro is near the bottom, and since they are still priced at the top, and are the "pro" choice, they ought to benchmark at the top, not near it, and certainly not near the bottom.
Score: 8 Votes (Like | Disagree)
Read All Comments