At its 2017 Worldwide Developers Conference, Apple announced Metal 2, the next-iteration of its graphics API for iOS, tvOS, and macOS. Metal 2 includes support for VR content creation for the first time, and when Metal 2 was highlighted at the event, Apple said Valve, Unity, and Unreal would bring their VR tools to the Mac.

Epic Games is making good on Apple's promise, and has announced that it is releasing early access support for developing for virtual reality on Mac platforms through the Unreal Engine Github. 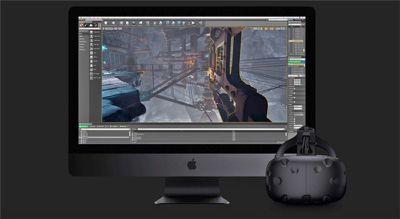 
Going forward, Epic Games plans to add full support for VR development on macOS in an upcoming release. Mac VR support, along with general Metal 2 support and Mac optimizations, will ship in Unreal Engine 4.18, with previews coming in September and a full release coming in early October.

Valve started offering a SteamVR for macOS beta back on June 5, as did Unity.

I think Apple should find a way to block the rift from working with Macs just to spite oculus.
That would be a nice punishment for biting the hand that feeds. :D

But either way, partnering with Valve is much better for Apple anyway, so no skin off Apples nose!
Score: 7 Votes (Like | Disagree)

If Apple keeps packing in mobile GPUs into desktops, his point will still stand.
Score: 6 Votes (Like | Disagree)

I think Apple should find a way to block the rift from working with Macs just to spite oculus.

Well, they did this a long time ago. They took forever to update OpenGL, and of course OS X didn't support DirectX, so they had no good options. But I haven't bothered checking whether High Sierra will change this.
[doublepost=1498038976][/doublepost]

If Apple keeps packing in mobile GPUs into desktops, his point will still stand.

The new iMacs do meet their recommended specs. Their GPUs are smaller than Nvidia's but aren't considered mobile. Also, there are plenty of VR systems that work fine with much weaker GPUs, so I don't know why their requirements are even that high.
[doublepost=1498039841][/doublepost]

Probably something along the lines: "finally, welcome to 2015 Apple".

Meanwhile, plenty of game devs are stuck in 2005 with 32-bit single-platform software because everything they do is a hack in comparison to Apple and Valve. Apple's been approaching this like they approach most things (except the effing dongles), very carefully. And Valve has been doing a great job of making their games optimized and multi-platform. I'm sick of Microsoft and pals making a mess of this ecosystem, and for once, I feel there's a great chance of Apple taking some of the gaming market.

This is not to justify Apple's lack of support for putting, say, a GTX 1080 into a Mac. You still have to use a pre-2013 Mac Pro for that, which is ridiculous. So, yeah, big middle finger to Tim Cook for that.
Score: 4 Votes (Like | Disagree)

Probably something along the lines: "finally, welcome to 2015 Apple". Ever wondered why Unreal didn't support VR earlier on Mac? Might be because Radeon Pro 580 is first ever GPU in any Mac to meet minimum requirements for VR (and it actually barely meets them).