Emoji site Emojipedia has details on all of the new emoji that are included in the update, and has shared a sample image featuring visual representations of the new additions. 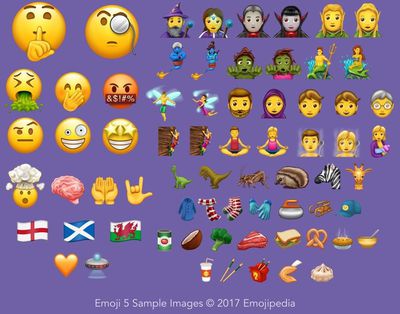 New child, adult, and older adult emojis in a range of skin tones are included, as are options for person in steamy room, bearded person, mage, fairy, vampire, merperson, elf, genie, person climbing, person in lotus position, and more, with all of those emoji available in multiple skin tones and genders. While there are 56 distinct new emoji characters, gender/skin tone modifiers and flags bring that total to 239.

These new emoji will not be available for Apple products until Apple adds support for Unicode 10, and the actual artwork for each emoji on iOS and Mac devices will be up to Apple to provide.

It typically takes Apple several months to implement support for new emoji, so the Unicode 10 options could be implemented in the fall of 2017. Emoji in Unicode 9, which was released in June of 2016, were added to iOS in iOS 10.2 in October.

Asarien
The continuing evolution of the dumbing down of the population.
Score: 15 Votes (Like | Disagree)

You say that as if these are the worst things to happen in the last month.

macduke
For some reason I read this as "The Unicorn Consortium." And you know what? That doesn't seem completely wrong.
Score: 11 Votes (Like | Disagree)

Babu Life
With more emojis and fidget spinners what has this world come too
Score: 9 Votes (Like | Disagree)

omihek
I used to not like emoji. About a month ago I started using them to lighten up my text conversations with my wife and I've come to like them a lot. Most of these look like fun new additions.
Score: 7 Votes (Like | Disagree)

Getting dumber by the minute? Pretty soon the alphabet letters will be obsolete and will be replaced by pure emojis. This is the world I'm leaving my kids into...

Imagine going into a job interview with a resume with:

Knows how to type :eek:
Will contribute to the company o_O
Slacker extraordinaire :D:cool:;)

I may be showing my age but this is just insane:mad::rolleyes:
Score: 6 Votes (Like | Disagree)
Read All Comments