Setapp, a company that offers a Mac app subscription service, recently polled 742 developers to get their thoughts on the Mac App Store and the state of Mac app development. The survey is a follow-up to a survey that was conducted last year, which concluded many Mac developers are unhappy with Apple's platform. 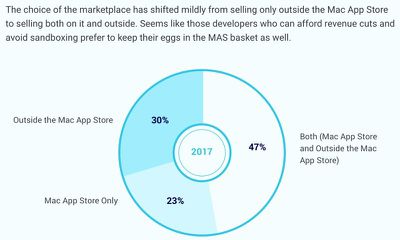 Developers who don't use the Mac App Store cite reasons like the long app review process, the 30 percent revenue split with Apple, and the inability to offer trials.

Developers were asked how likely they were to recommend the Mac App Store as a primary distribution channel to a friend or colleague, and the results were tallied using a Net Promoter Score that can range from 100 (everyone recommends) to -100 (no one recommends). A higher negative score means a more negative opinion.

Sandboxing, a lack of analytics tools, no app bundles, no upgrades, and no ability to respond to reviews were seen as major factors limiting developers' businesses. As of iOS 10.3 and macOS Sierra 10.12.4, developers have been able to respond to customer reviews, eliminating at least one factor keeping developers from using the Mac App Store.

On the plus side, developers were happy with improvements to the Mac App Store review process and the speed with which apps go through the review process, while opinions on Mac App Store communications, review guidelines, and the appeal process saw smaller positive changes.

Going forward, developers would like to see faster app approval times, more flexibility when it comes to Apple's sandboxing policies, better communication with the Mac App Store approval team, and clearer explanations when an app is rejected.

Additional topics, like the new subscription options, are covered in the survey and can be viewed over on the main survey page. There are also comparisons between the 2016 survey for a clearer look at the state of the Mac App Store.

wwchris
Mac App Store could really use some work. I can't believe you still can't even see video previews for games. Also, Apple does nothing to market or promote it other than forcing app updates through it.
Score: 13 Votes (Like | Disagree)

Mac App Store could really use some work. I can't believe you still can't even see video previews for games. Also, Apple does nothing to market or promote it other than forcing app updates through it.

Speaking of updates in the app store. I really miss the update app they had before updates were shoehorned into the app store. It was so much more responsive and useful.

1. It was waaaay faster and scanning your system at providing update results.
2. The updates list was clear and concise, with no ambiguity about what could be updated, without having to expand sub-installer lists.
3. The information it provided was far more useful and accessible, like whether or not the update required restart (was much easier to identify), and most importantly, download SIZE, BEFORE starting the download. That small piece of info was extremely useful for determining whether I was going to run an update now, overnight, or even at all.
4. It wasn't so buggy. The app store updater is often unresponsive, doesn't update status, and sometimes just hangs.
Score: 7 Votes (Like | Disagree)

rockarollr
The Mac App Store needs to be eliminated completely. Everything worked just fine for software distribution before its advent. All it is (and ever was) is another way for Apple to control all aspects of its business model to generate even more revenue for the company. Because, you know, they don't already have enough money without it.

From what I understand it's also a pain in the ass for Mac developers. That sounds to me like it's a lose/lose proposition for everyone BUT Apple.
Score: 5 Votes (Like | Disagree)

coolfactor
I only use the App Store to get updates, rarely to search for and install new apps. I find the App Store's design (at least the Updates panel) to be an embarrassment to Apple's legendary design skills. I'm surprised they've let it go this long without some improvements. It really is their worst piece of software to date.
Score: 5 Votes (Like | Disagree)

d21mike
As a user I will always try to buy from the App Store first. Much easier to manage with multiple devices. I.E. iMac and MacBook. Also, I am not giving out my credit card to unknown developers. It feels safer to me. Feels a lot like the iOS App Store.
Score: 3 Votes (Like | Disagree)

Stella
Apple have ignored the MacApp Store, while claiming "the mac is important".

If Apple can't put effort into improving the MacAppStore, they should just get rid of it.

I prefer buying outside the MacApp Store. I can't remember the last app / or when I did buy something from there.
Score: 3 Votes (Like | Disagree)
Read All Comments