A new DevMate survey recently polled around 700 Mac developers to get responses on how they feel working on OS X, and the lack of app visibility on Apple's Mac App Store. As The Next Web reports, the developers' responses highlight a stark difference in the iOS and OS X platforms, with a majority of DevMate's surveyed developers dissatisfied with Apple's 30/70 revenue split and poor distribution policies.

When asked, "How do you distribute your Mac applications?" nearly 35 percent of the quizzed developers preferred to specifically share and market their apps outside of the Mac App Store, on their own third-party websites. About 23 percent stick solely to Apple's Mac App Store for distribution, while 42 percent are straddling the line and working with both. Sources of revenue for the developers in the dual-distribution approach are said to be "split almost evenly." 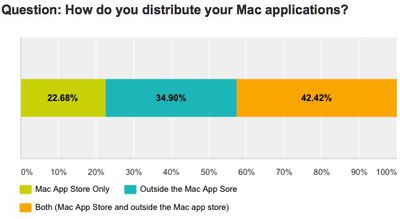 All the same, those in the weeds of the Mac App Store say they would advise another developer against selling their app within Apple's OS X storefront. Of those 35 percent of developers living exclusively outside the Mac App Store, "a whopping 97 percent say they’d try to talk someone out of using Apple’s official App Store."

Another section of the survey asked if developers believed Apple's 30 percent revenue cut was worth all of the features gained from using the Mac App Store, with 62 percent responding with "no." Problems arise from the developers' inability to address and communicate with reviewers directly, or offer trial periods for apps.

Apple's OS X App Store has been a pale comparison to its iOS relative since its launch five years ago. Rumors swirling around a possible rebrand of OS X to "macOS" have led to hopeful speculation that changes could also come to Apple's lackluster desktop App Store, but the company has yet to comment on any of these reports. With a software-heavy WWDC predicted for next week, it's possible that Apple will address some OS X-related concerns during its keynote speech.

Rather than bolstering the security in OS X or designing some sort of proper low level system that could be made compatible with all existing applications, we get this tacked on dog turd that essentially assumes all applications are glorified word processors. It takes a special kind of stupid to design a system so badly thought out that your developers literally need to sell two versions of their apps- one on the Mac App Store (intentionally crippled to play well inside the sandbox system), and another direct download from the developers that is fully enabled and genuinely useful.

Personally, I won't buy anything from the MAS because of this ****. I refuse to support Apple's brain dead security system not only because it cripples most applications, but because I don't want them considering it a success and making it mandatory in the future.

It is, by far, one of the most harmful technologies present in OS X, and has only served to dampen the inertia of the MAS and damage developer <-> consumer relationships by forcing developers to sell intentionally broken versions of their applications.

SandboxGeneral
As a consumer, not a developer, the only things I like about the MAS is a one-stop-shop collection of apps to search through, and that there is a reasonable level of security and safety in getting apps there as opposed to elsewhere and risking getting malware of some type.

With that said, I actually rarely ever get an app from the MAS or elsewhere, I just don't get many apps and already have what I need/want for now. But the appeal of getting apps not in the MAS like trial periods and discounts is what will drive me to look for them outside of the Apple ecosystem.
Score: 10 Votes (Like | Disagree)

And it's only going to get worse when apple rolls out new desktop computers based on the A10 processor and ONLY apps sold through the app store will be allowed to be installed on the desktops and no third party apps. Just like the App Store is now for the phone.

Highly unlikely that Mac OS will ever become a completely closed ecosystem as it would be a sad day and a fool's errand to go that way, but on that day I'll finally stop buying Mac computers.
Score: 8 Votes (Like | Disagree)

Partly due to high prices, removed multiplayer options, a gruelling refund process, compatibility issues, poor ports, and lack of updates from developers, I wouldn't consider anything other than Steam or GOG to buy games for OS X.
Score: 6 Votes (Like | Disagree)

darrynsmith
My biggest complaint from a consumer perspective revolves around upgrade discounts.

On the one hand, I don't think that buying a piece of software once should entitle me to lifetime upgrades. On the other hand, I resent having to pay full price for each major upgrade (3.0 -> 4.0 for example). For most of my decades-long computer experience, the discounted upgrade path seemed most fair – a loyalty reward but continued revenue for the developer.

Last I knew, this was virtually impossible on the MAS, and so I buy from dev sites directly whenever possible.

Best example: anything from the Omni Group ('https://www.omnigroup.com').
Score: 4 Votes (Like | Disagree)

SteveJobs2.0
Based on how the geniuses in charge of the current App Store think, the solution to this dissatisfaction issue is nothing other than... Free Apple Watch bands! Free bands for everyone!
Score: 4 Votes (Like | Disagree)
Read All Comments